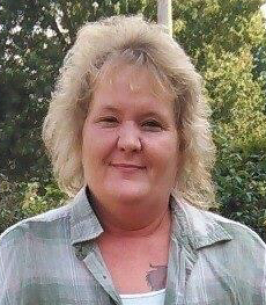 Teresa Marie Caverley, age 53, of Goshen, was called to her forever heavenly home on Thursday, August 5, 2021, just before 8am, in her residence. Teresa was born in Warsaw on February 25, 1968, to Dale and Geraldine (Caverley) Hatfield. Teresa lived much of her life in the Warsaw and Goshen area.

Professionally, Teresa most recently worked in upholstery for Lippert Components, at Veada, in New Paris. She was hardworking and a dedicated employee; her colleagues and supervisors attested to this, stating that it would take two or three good workers to replace Teresa. Some may also remember Teresa from the years she supervised in housekeeping, at Comfort Inn/Holiday Inn, in Warsaw.

Teresa was a beautiful woman who believed in others. She embodied a strong resilience which reflects her life greatly. A genuine fan of classic country music, Teresa enjoyed her NASCAR races, as well a good western series. Teresa was a great friend to many and she loved her family dearly.

A Life Celebration® is planned with Titus Funeral Home and Cremation Services, 2000 East Sheridan Street, Warsaw. Two visitations are planned: Wednesday, August 11, 2021 from 2 to 4 and 6 to 8 p.m. and Thursday from 10 to 1 and 3 to 5 p.m. Teresa’s funeral service will take place at 5p.m., on Thursday, in the funeral home. All who would like to honor and celebrate the life and legacy of Teresa are welcome to come and pay their respects.

Memorial gifts should be directed to one of Teresa’s greatest loves – her grandchildren. Gifts will be well-welcomed by Melina, one of Teresa’s daughters. Written condolences may be left for the family at www.TitusFuneralHome.com


To order memorial trees or send flowers to the family in memory of Teresa Caverley (Caverley), please visit our flower store.