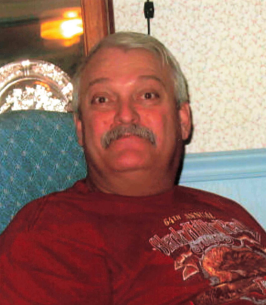 Steven “Steve” Eugene Heckaman, 65 of Warsaw, passed away on Tuesday, March 23, 2021 at 09:47 a.m. at Lutheran Hospital in Fort Wayne. Steve had been fighting a long battle with heart failure.

He was born on July 13, 1955 in Elkhart to Oscar Jr. Eugene and Betty Lou (Whitaker) Heckaman. Betty remarried to Ellis Dean Wildman and moved to Warsaw, Indiana. Dean was the only father Steve knew. Dean raised Steve and his brother, Rick and helped him to learn his craft as a drywaller.

Steve married Susan Rose Creekmore on May 9, 1981. They were planning on celebrating their 4Oth Wedding Anniversary this year.

He worked at the former R&R Donnelly and Sons Printing company for 20 years as a material handler and continued to work part-time with Dean doing drywall. Steve had a third job as well, but it was a job of love and passion - running a trapline every fall and bring home Susan a mink as well as make enough money to buy Christmas presents for his three kids.

Steve was a big kid at heart and had a big heart when it came to helping others. Much of his years were spent with his kids and grandkids. He loved the joy of showing up with a new toy or other gift and getting right down on the floor and playing. He found many of these through his hobby of attending auctions, flea markets, and garage sales. He loved going to flea markets and interacting with others and finding interesting, unique gifts for people; one never knew what he would find. The stories behind his finds were at times greater than the gifts. He was a great storyteller. Often, the grandkids would go to Susan to see if the story their Papaw was telling them was true or not.

Steve loved to be outdoors. He was a hunting, trapping, and fishing enthusiast and enjoyed going to his brother Rick’s to see what was biting. In addition to fishing, Rick and Steve shared a passion for Hunting. Steve’s other favorite outdoor buddy was his brother-in-law, Dave Creekmore. We will leave their fishing stories to rest with Steve. Steve dreamed of becoming a mountain man, like in his favorite movies “Jeremiah Johnson” and “Mountain Men.” He could recite these movies in his sleep. He may never have made mountain man status, but to his Wife, kids, and grandkids he was a mountain of a man who was deeply loved and will be missed.

A Life Celebration® is planned with Titus Funeral Home, 2000 East Sheridan Street, Warsaw. Friends may gather there for visitation on Sunday, March 28, 2021 from 2 to 5 p.m. A service which celebrates Steve’s life will take place on Monday, March 29 at 10 a.m. with an additional hour of viewing prior to the service. Burial will take place in Oakwood Cemetery, Warsaw.

Those wishing to express sympathy may consider assisting the family with final expenses, care of Titus Funeral Home, 2000 East Sheridan Street Warsaw, IN 46580.

To order memorial trees or send flowers to the family in memory of Steve Heckaman, please visit our flower store.