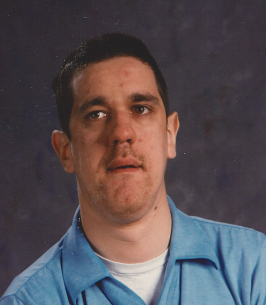 Sterling Scott Sparks, age 59 and a lifetime resident of Warsaw, passed away on February 17, 2021 at 3:13 p.m. in Trailpoint Village, South Bend. He was the son of the late Harold Sparks and the late Violet (Arrasmith) Sparks, born at Murphy Medical Center in Warsaw on March 3, 1961.

Though non-verbal, Sterling was active and ornery and was always sure to let you know how he felt. He enjoyed Westerns on television, sitting in his rocking chair and snacking on Reese’s Peanut Butter Cups. He had previously worked with Cardinal Services and attended their day program for many years before living in the Parker Street home where he was loved by all the staff and house mates.

Sterling was preceded in passing by his father, Harold; his mother, Violet and an infant sister, Angela Star Sparks. He is survived by his sister, Harla Sparks of Warsaw; two cousins, Joe (Tracy) Condinho of Milford and Dianna Shoffner of Warsaw and his extended family.

Friends may join the family for a time of visitation on Monday, February 22 from 5 to 8 p.m. at Warsaw’s Titus Funeral Home, 2000 East Sheridan Street. A private graveside service will be held in Oakwood Cemetery, Warsaw. Memorial gifts may be directed to a charity of the donor’s choosing while written condolences may be left at www.TitusFuneralHome.com

To order memorial trees or send flowers to the family in memory of Sterling Sparks, please visit our flower store.