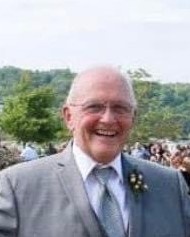 Stephen Burton Tracey, 82, passed peacefully surrounded by family on July 6, 2022. Stephen was born in Weymouth, Massachusetts on September 28, 1939 to Russell Sturgis Tracey and Margaret Evelyn Stetson. Stephen graduated from Boston Latin School in 1957 and attended Tufts University until 1960. He then entered the Massachusetts Army National Guard before completing his college at Suffolk University in 1964. Upon graduation, he traveled to San Francisco, California where he met his first wife Mary Gunhus (Campbell). They had three children, Kevin Tracey (Margie Slusser) of Syracuse, Indiana, Lara Eckrich of Granger, Indiana and Patrick Tracey of Bloomington, Indiana. Stephen has two stepchildren by Susan Ponder (Delgado), Barbara Williams (Jen Metz) of North Port, Florida and Scott Gardner of Cary, North Carolina.

Stephen and Mary moved to Chicago in 1965 before moving to Fort Wayne the following year. They lived in Ft. Wayne before moving to Syracuse, Indiana in 1974. Stephen worked in marketing and advertising with Del Monte and later was the VP of Marketing at Starcraft. He then segued his experience into starting his own business, Stephen Tracey and Associates, which specialized in recreational vehicle photography. Stephen was one of the early 15 members of the Fort Wayne Rugby Club. Stephen was also an avid baseball player, having played at Tufts University.

Stephen had many interests including fishing, cooking (as well as inspiring others to cook), hunting, rugby, baseball, music appreciation, boating, and camping. An adventurer at heart, he also loved to travel. Stephen changed lives with every one of these interests and had a profound impact on everyone he met and was a mentor and friend to all.

His love of family and friends was often enjoyed around the fabulous meals created by Steve. He is known by many as a renowned cook and a fabulous host of memorable meals. Stephen’s talent for creating gourmet extended past kitchen walls and into the wilderness where he cooked at the Lady McBeth Memorial Grouse and Woodcock Camp for over 30 years. Stephen attended The Vine Goshen, Vineyard Church in Goshen, Indiana.

There will be a gathering from 1:00 – 3:00 PM, on July 16, 2022 with services following at the Owen Family Funeral Home at 1001 S. Huntington St, Syracuse, Indiana, with pastor Amanda Clark and pastor Travis Conklin officiating.

To send condolences to the family of Stephen Tracey, please visit titusfuneralhome.com.

To order memorial trees or send flowers to the family in memory of Stephen Tracey, please visit our flower store.