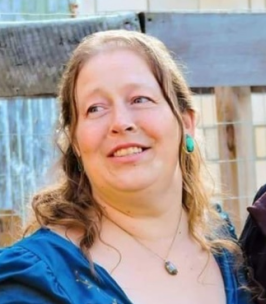 Sandy K. (Eccles) Galbraith, age 50 of Marion and previously a longtime resident of Warsaw passed away on Saturday, April 10, 2021 of injuries sustained in an automobile collision.

The daughter of Jerry and Jody (Williams) Eccles, she was born in Muncie on August 22, 1970. She was the eldest of seven Eccles children and was united in marriage to Don Galbraith in October of 2016. The pair made their home in Marion; Don survives though he also sustained serious injuries.

A lover of the outdoors and of God’s creations, Sandy was a beekeeper, farmer, gardener and animal lover. She made her living through these passions and was often a vendor at local farmer’s markets and swaps. She enjoyed fantasy in both literature and television and is remembered for her larger-than-life personality.

In addition to her husband, a list of those who will miss her feistiness, her humor and her big-heartedness includes stepsons, Zachary and Corey; mother, Jody Eccles of North Webster; siblings: Mitchell (Misty) Eccles of Rochester, Elisabeth (Jason) Sumpter of Warsaw, Sara (Josh) Craig of Twelve Mile, Jo Anna Eccles of Leesburg, Joy (Bruce) Woodward of Indianapolis, and Robert (Melissa) Eccles of Warsaw. She is also survived by many nieces, nephews, great-nieces and great-nephews. Sandy was preceded in passing by her father, Jerry Eccles and by her grandparents.

A Life Celebration® is planned with Titus Funeral Home, 2000 East Sheridan Street, Warsaw where friends may gather for visitation on Monday, April 19, 2021 from 4 to 8 p.m. Her funeral service will take place on Tuesday at 11 a.m. in the funeral home. Burial will follow at Washington Union Cemetery, Pierceton.

Memorial gifts may be given to the family to assist with final expenses. Checks may be written to Titus Funeral Home, 2000 East Sheridan Street, Warsaw, IN 46580. Written condolences may be left on their website at www.TitusFuneralHome.com

To order memorial trees or send flowers to the family in memory of Sandy K. (Eccles) Galbraith, please visit our flower store.