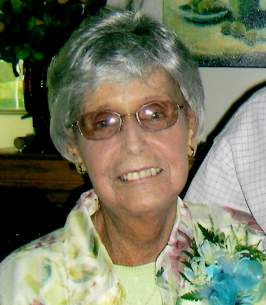 Ruth was the daughter of the late Luther and Ilah (Hatfield) McColley. She was born in Clunette on December 29, 1924 and was one of three children raised in the family home. On July 11, 1943, she was united in marriage to Dale W. Byrer, the only son of Homer and Mildred (Creighton) Byrer. Dale was the love of her life and they spent more than 74 years together before his passing January 9, 2018.

Prior to their marriage, Ruth had attended secretarial school in South Bend and spent some time working as a secretary with the Studebaker Corporation. She was a hard worker with a tenacious spirit and helped her husband to care for their Stony Point dairy farm. Though she helped with most tasks, she took great pride in helping with their egg business and their large vegetable garden. After retiring from their Stony Point dairy and chicken business in 1987, Ruth and Dale moved to Hoffman Lake where they resided for the next 31 years. She was very involved in her church, Atwood’s Otterbein United Methodist Church, and the United Methodist Women where she held numerous offices including President. Ruth also enjoyed being active in the County Home Extension Club 55. She enjoyed time spent in Florida where she and Dale wintered for 17 years.

Food was Ruth’s love language and she loved sharing her cooking talent with others – especially her family whom she loved dearly and of whom she took great pride. Those who survive include three daughters: Carolyn (and Richard) Ringeisen of Seneca, SC, Jeannette (and Richard) Findley of Solomons, MD and Myra (and Steve) Alexander of Milford, IN; five grandchildren: Heather Ray of South Carolina; Bradley New-Ringeisen of Virginia, Matthew Findley of Colorado, William Findley of Florida, and Amber Thomas of Milford; and two step-grandchildren: Matt Alexander of Ohio and Janelle Swihart of Florida. She is also the proud great-grandmother of nine. In addition to her parents and her husband, she was preceded in passing by sister, Mary Alice Lewis and brother, Clifford McColley.

Ruth’s life will be celebrated in a memorial service to be announced later. Service details will be released nearer the service date. Final interment will be in Stony Point Cemetery.

Memorial gifts may be given to Atwood Otterbein United Methodist Church, P.O Box 98, Atwood, IN 46502. The staff of Titus Funeral Home considers it a privilege to care for the family and friends of Ruth Byrer.
To order memorial trees or send flowers to the family in memory of Ruth Byrer (McColley), please visit our flower store.