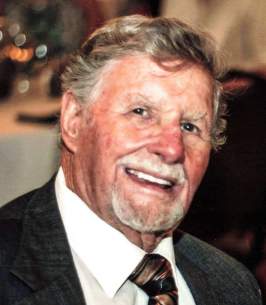 Roman S. Katzer, of Eagle River, Wisconsin, passed away on Thursday, December 9, 2021, in Milford, Indiana at the age of 87.

Roman was born in Milwaukee, Wisconsin on August 15, 1934, to Roman A. and Sylvia C. Katzer. He was united in marriage to his loving wife Leatrice Joy Lodes on September 17, 1955. Together they raised six children. Roman was employed by Moore Business Forms and retired as a highly successful Senior Account Executive.

Many of Roman’s accomplishments stemmed from his love of the outdoors. This legacy of love for the outdoors was passed on as Roman taught responsible hunting and fishing to his children and grandchildren.

Roman and Joy served the disabled for many years through their annual volunteer service in the Eagle River chapter of Fishing Has No Boundaries. He also served his community as a member of the Elks Club and was an avid conservationist and 35-year member of the Petermans Hunting and Fishing Club, as well as serving in the Boy Scouts of America as a scout leader.

Roman and Joy would travel south to Golf Shores, Alabama during the winter months, however the rest of the year they loved being on the lake at their cabin home in the North Woods of Wisconsin enjoying fishing and deer hunting.

Friends and family may gather for visitation on Saturday, December 18, 2021, from 1:00PM until the Life Celebration® at 2:00PM at Titus Funeral Home, 2000 E. Sheridan Street Warsaw, IN 46580. To make a donation in Roman’s honor, memorial gifts are appreciated to Fishing Has No Boundaries, PO Box 2200, Eagle River WI 54521. Written condolences may be left at www.TitusFuneralHome.com
To order memorial trees or send flowers to the family in memory of Roman Katzer, please visit our flower store.