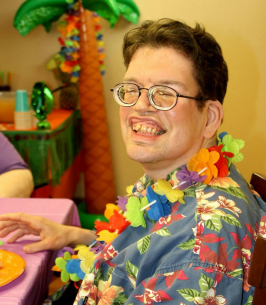 Ricky L. Bolinger, age 54 and a longtime resident of Wabash, passed away on Easter Sunday, April 4, 2021 in his home.

He was born on March 13, 1967 in Warsaw, the son of Ted Bolinger and Lanora Riggle. Ricky was born with cerebral palsy and received services through Cardinal Services in Warsaw for many years.

He loved stuffed animals of all types. He also loved television programs like “Hee Haw” and was simply enamored by infants and toddlers. Ricky liked children and always had a smile to share with others, strangers, and friends, alike. He was easy-going and will be dearly missed by those that shared in his life.

A Life Celebration® is planned with Titus Funeral Home of 2000 East Sheridan Street, Warsaw where friends may gather on Saturday, April 10, 2021 beginning at 9 a.m. At 11 a.m., Aaron Jones, Pastor of the RUWM will officiate Ricky’s funeral service with burial to follow in Oakwood Cemetery.

Those wishing to express their sympathy might consider a memorial gift to the activities department of Vernon Health and Rehab, 1955 South Vernon Street, Wabash, IN 46992.

To order memorial trees or send flowers to the family in memory of Ricky Bolinger, please visit our flower store.