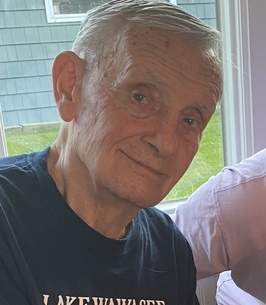 Dick Witt, a resident of both Syracuse, Indiana and Sebring, Florida, passed away unexpectedly at Indiana
University Medical Center, Indianapolis on Friday, May 28, 2021. Age 81, he was a loving father, husband,
grandfather and great-grandfather.

Born Richard Cary Witt on August 24, 1939, in Indianapolis, Dick was the son of the late Walter and Olive
Witt. He graduated from Broad Ripple High School in 1957 and went on to graduate from Butler University in
1961.

Professionally, Dick worked for NAPA Auto Parts. He began his career climbing the corporate ladder, working
in distribution centers and corporate settings for several years though this required his young family to move
around, and he was often traveling. In 1973, he purchased his own NAPA store in Warsaw and later added
stores in nearby North Webster and Syracuse. This was fitting as his father, Walter, worked for NAPA. Later,
his own son, Gary joined the family business and in 2019, Dick’s grandson, Josh became the fourth-generation
owner of the NAPA family business with assistance from his brother, Zach.

Dick was a huge fan of the St. Louis Cardinals and enjoyed golfing. He was a longtime member of the Warsaw
Breakfast Optimist Club and of Warsaw First Presbyterian Church where he was a deacon and an elder. Many
may remember him as a member of the Warsaw Zoning Board, but his friends remember him best from their
long-standing Friday evening dinner group.

Perhaps it was his proximity to Speedway, Indiana or his uncle’s career as a race car mechanic in the 1950s and 60s that lead Dick to love the Indianapolis 500. He attended the race and festivities many times and watched or listened to it when he could not. He will be listening from a higher place this year.

Dick’s other great love was Lake Wawasee. As a high schooler, his family spent their summers at the lake. In
1972, his family purchased a home on Lake Wawasee which is where he and Nancy have called home since
1994. His daughter, Gay, shares the same love of the lake. Summer weekends found her and her family, Dan,
Kari, and Sean making next generation memories. Another favorite time of Dick’s at the lake was his weekly
Wednesday visit with Gary and Candy and his twin great-grandsons.

To his family, Dick is best remembered for his dedication to them - he would do almost anything for his family,
especially his grandchildren for whom he rarely missed an event or occasion. He was a little bit ornery and very much a person to take charge, helping his family in any way possible.

In lieu of flowers, donations in Dick’s memory can be made to IU Health Foundation-IU Health University
Hospital at P. O. Box 775589, Chicago, IL 60677-5589 or iuhealthfoundation.org/donate.
To order memorial trees or send flowers to the family in memory of Dick Witt, please visit our flower store.