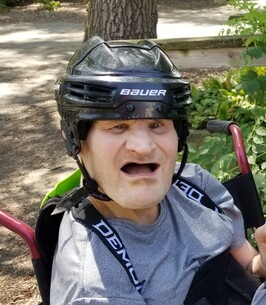 Raymond grew up in the family home and lived much of his life in northwest Indiana. He spent the last several years living in Warsaw where he received care from his family at Cardinal Services.

One caregiver remembered “Raymond was relentless in his pursuits, whether finding something new to chew on or going after the objects of his affection. He was lover and loved with all his being! He had a smile which could chase away rain clouds. He enjoyed sitting quietly on the couch with the person of his choosing. He was sneaky and if he thought you weren’t looking, (he could be quite ornery). He had a great sense of humor and, when he laughed, he made others laugh, too. He loved being outdoors and enjoyed the sunshine.”

He leaves behind three siblings, a host of friends and a large extended family. Those who cherish him most will gather for funeral services, at noon on Monday, May 17, 2021 with an hour visitation prior to the service, 2000 East Sheridan Street, Warsaw.

Memorial gifts may be directed to Cardinal Services, 504 North Bay Drive, Warsaw while written condolences may be left at www.TitusFuneralHome.com

To order memorial trees or send flowers to the family in memory of Raymond Bodnar, please visit our flower store.