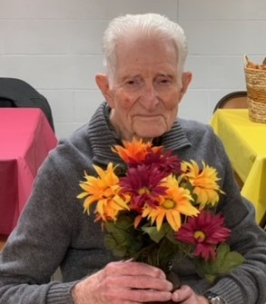 Paul Haney, a resident of Winona Lake, Indiana, passed quietly at Grace Village Healthcare Center on Monday, November 8, 2021. He was 96 years old when our Lord took him home.

Born in Nappanee, Indiana, on March 19, 1925, Paul was the second son of the late Ralph R. and Mary V. (Van Dyke) Haney. He grew up in Winona Lake, attending school at East Wayne (now Jefferson Elementary), and was a graduate from Warsaw High School in 1943. His family owned the Winona Dairy where Paul and his siblings worked in many capacities: pasteurizing, bottle washing, delivering milk, as well as waiting on customers in the storefront.

Paul attended Manchester College while awaiting a call from the U.S. Navy to join the WWll effort in the Pacific Arena. He honorably served in the United States Navy for two years, initially in the Great Lakes Naval Academy men’s choir, but assigned primarily in the Navy Band School of Music. Paul was in that School of Music at the time of President Franklin D. Roosevelt’s passing, and was chosen to be a part of the U.S. Navy Band that marched in the President’s funeral parade. Following his honorable discharge, Paul went on to earn a Bachelor’s degree from Wheaton College in IL. At a later time, he earned a Master’s degree at Syracuse University in New York.

On June 16, 1951, Paul was united in marriage to Virginia Mardikian. They would share more that fifty-nine years together before her passing in October, 2010. Three daughters and one son were born into their family.
Paul and Virginia traveled to Nigeria via ship in 1953. Together they served as missionaries, teaching with SIM. Paul dedicated much of his adult life to the Lord, serving and teaching others. Paul and Virginia spent much of the next thirty-five years serving in different places in Nigeria: Kwoi, Egbe (Titcombe College), Aba (Bible College, now named ECWA Theological College Aba). Returning to the U.S., Paul began to support the work of SIM, visiting donors of the mission, both in Indiana and in Michigan. In 1989, Paul and Virginia relocated to Sebring, Florida, to serve retired SIM missionaries, continuing their desire to serve others.

Paul lived to travel, loved people, and loved to share the Word with others. He was compassionate and loved to challenge people to think, often including a teaching moment. Paul also had a great sense of humor. It was evident that he never lost his love for music. In his retirement, Paul was active in several community choirs. Locally, he was a member of The Church of the Good Shepherd, Winona Lake.

In addition to his wife, Virginia Haney, and his parents, Paul was preceded in death by three brothers; G. Robert, M.Bennett and R. Joel Haney, as well as an infant sister whom was R. Joel’s twin.

Friends may gather at the Church of Good Shepherd, 708 College Ave., Winona Lake, IN 46590 on Saturday, November 20, 2021 at 10 a.m. At Noon, Pastor Eric Sass will officiate Paul’s Life Celebration® with military honors following the service. Final interment will be in Sebring, Florida at Pinecrest Cemetery.

Or to assist in funding to broadcast short wave radio Christian programming, reaching Africa, Asia, and the Middle East.
NBCWO
741E Winona Ave.,
Warsaw, IN 46580
To order memorial trees or send flowers to the family in memory of Paul Haney, please visit our flower store.

Church of the Good Shepherd

Church of the Good Shepherd