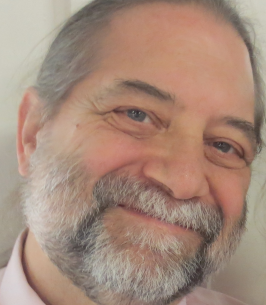 He is survived by his wife, Jacqueline Krull (a.k.a. Arianna Rose); his children, Rachel Jones, Tricia Beigh, Bruce Beigh, Brian Beigh, Brandon Beigh, and Amanda Stansell; his siblings, David Beigh, Karen Foster, and Cathy Hanft; and nine grandchildren. Preceded in death by his parents, Edwin and Valena Beigh, and his brother, Roger Beigh.

Paul was born in Warsaw, Indiana in 1955 and graduated from Warsaw High School in 1974. He married his high school sweetheart and long-time family friend, Barbara Stouder Beigh the same year and together they had six children. They divorced in 2003.

In 2009, Paul met Arianna Rose at a raw foods meet up at her house. Their relationship blossomed from there and they began dating in April 2011. They were married in June 2014 and lived in New York City until 2016, then moved to Miami Beach, Florida.

A life-long technophile and self-taught computer expert, Paul worked as a computer systems analyst for many years for several companies including HP and American Airlines.

Paul had a quiet strength and a generous spirit. He would happily give what he had to help others and expect nothing in return. He loved to cook for his family, especially chocolate chip pancakes and broccoli casserole (not at the same time). Later in life, he became a certified Raw Vegan Chef. He loved music, especially classic rock and he loved Sci-Fi, especially Star Trek. A good pun would make him laugh. A bad pun would, too. Two of his passions in life were photography and woodworking. He often gifted his beautiful photos & wooden creations to his family, which still adorn their homes. His passion for creating beauty (be they photos or wooden) inspired his children to create, craft, and build their own beauty in the world. He had a photographic memory, but always forgave and forgot.

Graveside services will be held at Graceland Cemetery, Claypool, Indiana, on September 27, 2021 at 1:00pm. Titus Funeral Home is in charge of local arrangements. (2000 Sheridan St, Warsaw, IN 46580)
To order memorial trees or send flowers to the family in memory of Paul Beigh, please visit our flower store.