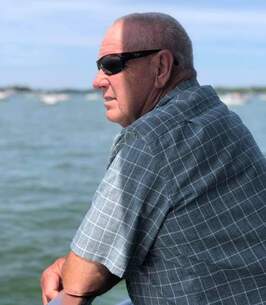 Patrick L. Minner, known to family and friends as “Pat,” passed away quietly in his Warsaw, IN home on Saturday, December 19, 2020 while surrounded by his loving family.

Born in Henning, TN on October 24, 1948, he was the son of Raymond and Dorothy (Flowers) Minner. He graduated from Ripley High School and went on to attend Memphis State. On February 26, 1969, Pat was inducted into the United States Army, serving honorably until his discharge on January 2, 1971.

On April 3, 1971, Pat was married to Mary Cole who survives in Warsaw. Their union, which spans fifty years, includes many happy memories and blessings, including two children and four grandchildren. Pat loved his family and his grandchildren beyond measure.

He was a hard worker, dedicating more than thirty years to Martin Cement as a concrete finisher. He was always willing to help others and was a true people person, even though he was quiet by nature. He loved all things outdoors but his true passion was fishing.

A Christian, Pat loved the Lord, loved his family and he had a heart for serving others. Those who survive include his wife, Mary Minner of Warsaw; daughter, Rebecca (husband, Quinn) Mills of Memphis, TN; son, Jason (wife, Bobbi) Minner of Bolingbrook, IL; four grandchildren: Patrick, Nora, Kenley and Reilyn; two sisters: Margaret (husband, Paul) Green and Donna Simpson and a large extended family. He was preceded in passing by his parents and a brother, Ray Minner.

A Life Celebration® is planned with Titus Funeral Home, 2000 East Sheridan Street, Warsaw, IN where friends may gather on Wednesday, December 23, 2020 from 2 – 4 p.m. Beginning at 4 o’clock, Pat’s brother-in-law, Pastor William Cole will officiate the service which will be Live Streamed. The Live Stream may be viewed on the funerals homes' website. Burial will take place at Marion National Cemetery at a later date which is to be determined.

In lieu of flowers, memorial gifts may be directed to Honor Flight of Northeast Indiana, PO Box 5, Huntertown, IN 46748. Written condolences may be sent to the family via www.TitusFuneralHome.com.

To order memorial trees or send flowers to the family in memory of Patrick Minner, please visit our flower store.