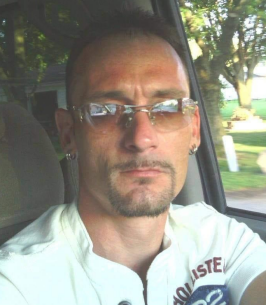 
Matthew Alan Lucas, age 42 and a lifetime Warsaw resident, heartbreakingly passed away on Tuesday, December 15, 2020 just before 10 a.m. in his Warsaw residence.

The son of the late David Lucas and Diane (Grindle) Burr, he was born in Warsaw on January 13, 1978. Matt, as most knew him, attended grade school in Atwood and graduated from Warsaw Community High School. He is remembered as laid back, loyal and kind-hearted.

Matt loved music of all kinds and liked working on cars which was fitting as he served in the United States Army as a heavy wheeled mechanic, serving mostly in Landstuhl, Germany. He enjoyed fishing and golf (which he was quite good at) and liked watching sports – especially the Chicago Bears. He attended Harrison Center Church with his family and was saved in faith through Jesus Christ.

A Life Celebration® is planned with Titus Funeral Home, 2000 East Sheridan Street, Warsaw where friends may gather for visitation on Tuesday, December 22, 2020 from 10 a.m. – 1 p.m. Matt’s funeral service will begin at 1 p.m. with burial to follow in Oakwood Cemetery, Pastor William Whitaker officiating.

Memorial gifts may be directed to the family to assist with final expenses. Monies in excess will be given to his children. Checks may be written to Titus Funeral Home, 2000 East Sheridan Street, Warsaw, IN 46580 with Matthew’s name in the memo line.
To order memorial trees or send flowers to the family in memory of Matthew Lucas, please visit our flower store.