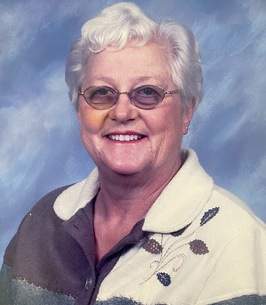 Marjorie Nice, age 89 and a longtime resident of Warsaw, passed away unexpectedly on Sunday, March 28, 2021 at 4 p.m. in her home.

The daughter of Ernest Adam Fryda and Viola (Connell) Fryda, Marjorie was born in Sussex, Wisconsin on August 17, 1931. She graduated from nearby Waukesha High School. Upon graduation she honed her skills as as executive secretary at Truax Air Field in Madison. Marjorie later moved to Warsaw where she worked at the United Telephone Company as an executive assistant for many years. She managed the local office of Indiana’s 2nd Congressional District from 1975 to 1983. Marjorie retired from INDOT where she worked as office manager.

Beyond her professional accomplishments, she excelled playing contract bridge in several clubs in the local area. She loved reading, gardening, and dogs. A private woman with a servant’s heart, Marjorie was a longtime member of Redeemer Lutheran Church, Warsaw. Her family and friends will carry her love and influence in their own lives.

She will be missed by those who survive including two daughters: Linda (John) Taylor of Savannah, GA and Debra (Dan) Lance of Mesa, AZ; seven grandchildren: Jennifer Taylor, Kathleen Taylor, Stephanie Taylor, Christopher Taylor, Megan Moody, Brianna (Justin) Frazier, and Tyler Swain; and a brother, Blaine Fryda of Cartersville, GA, and five great grandchildren. She was preceded in passing by brother, Robert Fryda; grandson, Michael Taylor, and her parents.

Private graveside services were entrusted to Warsaw’s Titus Funeral Home. Marjorie was laid to rest at Oakwood Cemetery on Thursday, April 1, 2021. Written condolences may be left for the family by visiting www.TitusFuneralHome.com

Memorials may be made in Marjorie’s memory to the Animal Welfare League of Kosciusko County, P.O. Box 1906, Warsaw, Indiana 46581-1906; or the American SIDS Institute, 528 Raven Way, Naples, Florida 34110,
https://www.sids.org/ways-to-help/donate/.
To order memorial trees or send flowers to the family in memory of Marjorie Nice (Fryda), please visit our flower store.