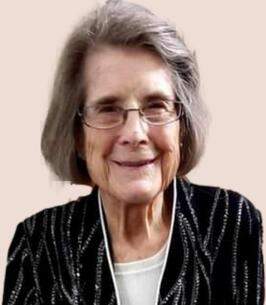 Margaret E. Allmon, a longtime resident of Warsaw, passed away at home on Sunday, January 16, 2022. She was 95 years old and was surrounded by her loving family at the time of her passing.

Born in Toronto, Ohio on July 23, 1926, Margaret was one of two children born to John and Orpha Mae (Lewis) Martin. She spent her formative years in Ohio and was a 1944 graduate of David Anderson High School in Lisbon. It was there that she was married to Herbert A. Allmon on October 11, 1946; the pair shared more than more than sixty-nine years together before his passing on January 25, 2016.

Herb and Margaret moved to the Warsaw community in 1967. Together they owned and operated Allmon Upholstery, working side-by-side for more than 40 years; this was in addition to her role at Kimble Glass where she worked for more than 30 years. The roles in which she took the greatest pride were as a committed wife, a devoted mother and as a proud grandmother, great-grandmother and great-great-grandmother. She loved her family dearly and was never happier than when all were together.

She enjoyed knitting, crochet, sewing and reading. She was a caring, selfless, and loving person who rarely knew a stranger. This was evident to all who met her but especially to members and visitors of Dutchtown Brethren Church where Herb and Margaret attended for many, many years.

Arrangements are entrusted to Titus Funeral Home and Cremation Services, 2000 East Sheridan Street, Warsaw where friends may gather for Margaret’s Life Celebration® visitation on Thursday, January 20 from 4 to 7 pm. On Friday, Pastor Emeritus Jack Worth will officiate Margaret’s funeral at 10 am in the funeral home; visitors will again be welcomed for one hour prior to the service. Burial will take place in Palestine Cemetery, Warsaw.

Memorial gifts may be directed to Dutchtown Brethren Church, 4057 East 300 North, Warsaw, IN 46582. Written condolences may be left for the family at www.TitusFuneralHome.com

To order memorial trees or send flowers to the family in memory of Margaret Allmon (Martin), please visit our flower store.