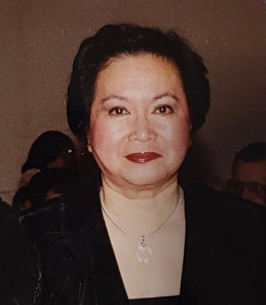 Dr. Leonora Noel, a longtime area physician, passed away quietly on Sunday, April 18, 2021 while visiting her
son in California. Called home by the Lord from PIH Downey Hospital, she was 86 years old.

Born in the Laguna region of the Philippines on April 19, 1934, Leonora was the daughter of Urbano and Salud (Vito) Gruezo. At a time of strict immigration criteria, she immigrated to the United States in the late 1960s in search of education and found it in New York where she attended NYU’s Grossman School of Medicine. She served her residency in the Bronx and later completed a fellowship through the University of Louisville.

A pediatrician for more than 40 years, Dr. Noel cherished seeing her patients grow and mature. Often, her
patients became parents themselves, bringing their families to her Buffalo Street practice for care. Her hard
work ethic and dedication to her calling was evident in her personal life, too. She was a loving, supportive
mother who always encouraged her son and grandchildren to achieve more, learn more and to be well-rounded people.

Leonora enjoyed shopping, especially for shoes, and traveling. She was always sure to seek out historic
churches in the areas she visited and was a devout Catholic herself. She was a longtime member of Sacred Heart parish in Warsaw where a Mass of Christian Burial will be held on Saturday.

Those who survive include son: Dr. Michael Noel, Huntington Beach, CA and two grandchildren, Justin and
Sophia Noel. She was preceded in passing by her parents, a brother and a sister.

To order memorial trees or send flowers to the family in memory of Dr. Leonora Noel, please visit our flower store.