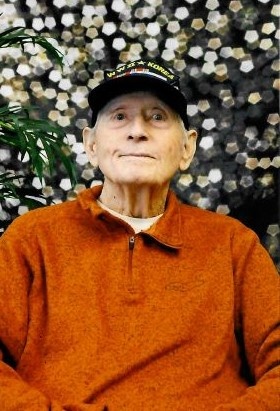 The son of the late Leo Cronkhite and Daisy Belle (Reynolds) Cronkhite, Leo was born on May 16, 1930 in West Lebanon, IN. He attended schools locally and entered service with the United States Army on July 18, 1946. He honorably served for three years and was assigned to the 8th Air Police Squadron. He was discharged on April 28, 1949. He also served honorably in Korea, earning the rank of Corporal.

Professionally, Leo spent much of his career in automotive sales. He sold many people their first car as a Ford salesman. He was a hard worker with a strong work ethic. Leo was a longtime member of North Winona Church of Brethren and of American Legion Post 49.

He is survived by his son, James Cronkhite (wife, Barbara Jo) of Alabama and his brother, Gary Cronkhite of Indiana. He was preceded in passing by his wife, Mildred (Unruh) Cronkhite; brother, Steve Cronkhite and sister, Bernadine Smith.

Titus Funeral Home and Cremation Services, 2000 East Sheridan Street, Warsaw, will be assisting the family. Visitation will be held there on Wednesday, June 1 from 4 to 6 p.m. Leo’s funeral service will take place in the Funeral Home on Thursday at 11 a.m. with doors open at 10:30 a.m. Pastor Mike Smith, North Winona Church of Brethren will officiate. Burial will follow in Hillcrest Cemetery, Pierceton.

Memorial gifts may be directed to either North Winona Church of Brethren or to American Legion Post 49 with envelopes available at Titus Funeral Home. Written condolences may be left for the family at www.TitusFuneralHome.com

To order memorial trees or send flowers to the family in memory of Leo Cronkhite, please visit our flower store.