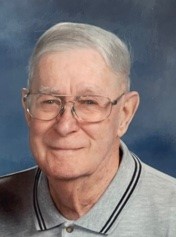 Junior grew up and lived in Connersville and graduated from Connersville High School. He was married on June 25, 1950 in Connersville to Barbara J. Stewart who preceded him in death. He was a mechanic and owner of Spivey’s Garage for many years and later worked as parts salesman for AutoZone. He moved to Syracuse, IN and lived with his daughter for several years before moving to Fort Wayne a year ago.

He was a member of the Grand Avenue United Methodist Church in Connersville and the Moose Lodge. He was an avid golfer and belonged to the Liberty Country Club. He enjoyed bowling and spending weekends boating on the Brookville Reservoir.

He was preceded in death by his parents, wife, a sister Barbara Thompson of Fairfield, OH and brother, Chuck Morris of Connersville.

No services are planned. Burial will take place in Dale Cemetery in Connersville, IN. Cremation Services of Kosciusko County, 4356 N. St. Rd 15, Warsaw, IN is in charge of arrangements.

To order memorial trees or send flowers to the family in memory of Lawrence H. "Junior" Morris, please visit our flower store.