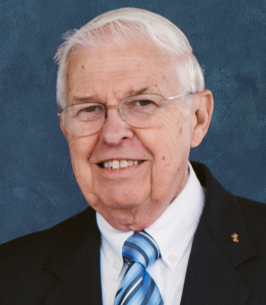 Throughout his career Kenneth was known as a servant leader, an encourager and a teacher who would explain the Bible in ways that could be easily understood. His life verse was Philippians 4:13 ‘I can do all things through Christ which strengtheneth me.’ (KJV) and his farewell message was ‘Always walk with the Lord. Keep Him by your side’.

He is survived by his wife of 62 years, Janice Koontz; brother, Charles (Alice) Koontz; and sons, Larry (Jean) Koontz and Rick (Tammy) Koontz, along with 4 grandchildren. Emily, Cody (Alexandra), Kenneth (Kristy) and Cassidy Koontz. He was preceded in death by parents Herman and Myra Koontz.

There will be a Life Celebration® on Wednesday, October 27 at 6:30 pm in the Lakeland Grace Brethren Church, 2538 South County Farm Road, Warsaw. Burial will take place earlier that same day in Oakwood Cemetery; those wishing to attend the graveside may assemble at Titus Funeral Home, 2000 East Sheridan Street, Warsaw at 11:15 a.m.

Memorial donations may be directed to Right to Life of North Central Indiana (RTL of NCI) PO Box 1162, Warsaw, IN 46581.

To order memorial trees or send flowers to the family in memory of Pastor Kenneth Koontz, please visit our flower store.