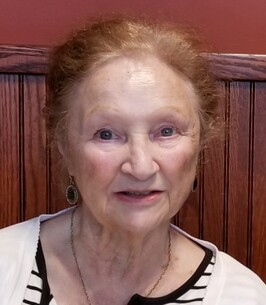 Julia “Judy” Roberts Boxell, 84, of Warsaw, passed away on March 11, 2021, surrounded by her children. Born December 22, 1936 in Peru, Indiana to Basil and Alice (Wilkinson) Roberts, Julia was the second youngest of eleven children and the apple of her father’s eye. He died when she was only five years old, but she spoke often of how he would return home from his job on the railroad late at night, carry her from her bed, and rock her beside the fire.

Their union was blessed with three children, son Jim (LeAnn) Boxell of Pleasant View, Indiana, and daughters Michelle and Dina Boxell, both of Warsaw. Also surviving are grandchildren Joshua and Rachel, great-grandchildren Braden, Ava, Laciee, and Keon, all of Indianapolis, and numerous nieces and nephews all around the world.

Julia was a working mother long before most others, working as an executive secretary at Magnavox, Dalton’s and Canonie Construction during the building of U.S.30. She then went to work in the accounting department of United Telephone, retiring from there after 15 years.

Julia enjoyed gardening, spending time with her family, vacationing on Cape Cod, watching old movies from the 30’s and 40’s, and family Christmas celebrations. She also enjoyed cheering for Notre Dame Football, Notre Dame Women’s Basketball and Chicago Cubs – she was thrilled to watch them win their 2016 World Series). She was also a huge supporter of Democratic Party politics. She was proud to have held a “Kennedy Tea” in her Peru home for Presidential candidate John F. Kennedy in 1960 that was attended by Eunice Kennedy Shriver.

Her children’s friends and kids from the neighborhood will remember her as a Neighborhood Mom, loading kids into the family station wagon and taking them to Franke Parke Zoo, the old Lake Theatre, Center Lake beach, Warsaw High School “away” basketball games, and providing a safe and loving second home.

The last to survive of eleven children, Julia was preceded in death and looks forward to a heavenly reunion with her husband, parents, and ten siblings (Dick, Pat, Mickey, Red, Marilou, Timmy, Kathleen, Joan, Marti, and Ceci.)

A Life Celebration® is entrusted to Warsaw’s Titus Funeral Home, 2000 East Sheridan Street where visitation will be held on Wednesday, March 17, 2021 from 9 to 11 a.m.. Mass of Christian Burial will be held at Sacred Heart following visitation. Burial will be in St. Charles Catholic Cemetery, Peru. Those wishing to attend the graveside may meet at St. Charles Catholic Church at 1:30 p.m. Judy was very proud of her Irish heritage and would be honored to be buried on St. Patrick’s day – guests are encouraged to wear green respectfully.

The family asks that any memorial gifts be made in Julia’s memory to either Cardinal Services (which she often wished had been around to serve her brother, Timmy and sister, Kathleen), or to Kosciusko Homecare and Hospice, (who provided loving care to Julia and her family in her final weeks).


To order memorial trees or send flowers to the family in memory of Judy Boxell, please visit our flower store.