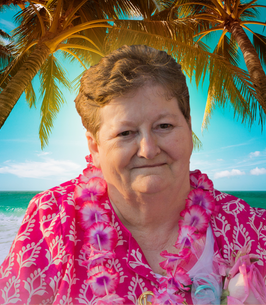 Joyce E. Groat, a resident of Fort Wayne and previously a longtime resident of Warsaw, went to Heaven on February 12, 2021. Her Thursday morning passing at age 77 was from Parkview Randallia Hospital, Fort Wayne.

Born in Wolf Lake on December 8, 1943, Joyce was the daughter of the late Glen and Wilma (Wolfe) Easterday. She was one of four Easterday children and grew up in the Columbia City area, graduating from Columbia City High School. She later attended Fort Wayne Commercial College where she received a certificate in Keypunch.

Professionally, Joyce worked for United Telephone for more than thirty years, beginning her career there as a switchboard operator. More personally, she was a kind, fun and feisty person with a very social way about her. She was ornery – loved to joke and laugh – and rarely knew a stranger. She enjoyed watching NASCAR, collected Longaberger baskets for many years and liked to bake, selling her goods and candies at craft fairs, for weddings, graduations, and the like. She was a longtime member of Warsaw Wesleyan Church and had been very active there – teaching Sunday School, helping in the nursery, leading the Cadets and around the church, working wherever she could be helpful.

On June 26, 1971, Joyce was married to John A Groat in Columbia City. The pair shared more than 45 years together before his passing in January of 2017. Also preceding her in passing were her parents and sister, Judy Hile. Those who survive include daughter, Ethel (husband, Rod) Massing of Fort Wayne; brother, John (wife, Susanne) Easterday of Huntington; sister, Jean (husband, Jene) Coy of Ooltewan, TN; brother-in-law, Alan Hile of Angola and two grandsons: Donavin and Kevin Massing.

A Life Celebration® is planned with Titus Funeral Home, 2000 East Sheridan Street, Warsaw where friends may visit on Tuesday, February 16, 2021 from 4 to 7 p.m. On Wednesday, Joyce’s life will be celebrated in the funeral home with service beginning at 11 a.m. Burial will follow in Warsaw’s Oakwood Cemetery.

In lieu of flowers, the family has asked that expressions of sympathy be made as gifts to Ashton Creek Health and Rehabilitation, 4111 Park Place Drive, Fort Wayne, IN 46845, for use in their activities department.

To order memorial trees or send flowers to the family in memory of Joyce Groat (Easterday), please visit our flower store.