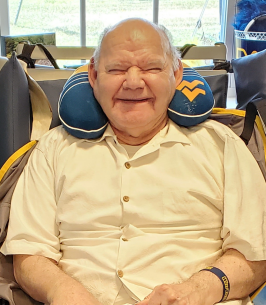 Johnny Ray Belcher, a longtime resident of Warsaw, passed away quietly at Paddock Springs Health Campus on Monday, January 3, 2022. He was 79 years old.

Johnny Ray was born in English, West Virginia on September 7, 1942. He was the son of Johnny Belcher and Myrtle (Vinson) Devitt and one of ten children in their blended families. He spent his formative years in West Virginia, moving to Warsaw, Indiana in the mid-70s, although he always maintained a love for West Virginia and was a huge fan of the Mountaineers. He loved WVU basketball and anything in their school colors, Old Gold and Blue.

Professionally, Johnny Ray worked for the Cardinal Center Workshop, now CCI Manufacturing, for many years. He began his career there in 1977 and retired in 2015. A hard worker, he also took up work with Lake Village Dollar General where he helped to stock shelves and clean, among other job duties.

In addition to anything West Virginian, Johnny Ray enjoyed BINGO, Bowling, and all types of music, especially Country Western and Gospel music. He was a huge fan of Halloween and costume parties – any reason to dress-up, really! He enjoyed Ghostbusters, the Chipmunks and Fourth of July Fireworks. He also found great joy in volunteering with the Knights of Columbus during their annual Tootsie Roll fundraiser. In addition, Johnny was very active in Special Olympics, especially in their Bowling and Basketball events.

Johnny Ray was loved by many nieces, nephews and two sisters, who survive, Donna Haynes and Edna Mae Bays. He was preceded in passing by his parents; one sister, Elizabeth Jane Lilly; and six brothers: Larry Dewayne Belcher, Francis “Bunny” Devitt, J. Allen Devitt, Ross Belcher, Jerry Lee Belcher and Damon Belcher. He was also dearly loved by his coworkers, nearly everyone he met, and those who aided in his care.

Arrangements are entrusted to Titus Funeral Home, 2000 East Sheridan Street, Warsaw where friends may gather on Friday, January 7 from 4 to 6 p.m. Beginning at 6 o'clock, Johnny Ray's life will be celebrated by those in attendance with Pastor Terry Baldwin officiating. Burial will take place at Graceland Cemetery, Claypool.

Memorial gifts may be directed to either Cardinal Services, 504 North Bay Drive, Warsaw, IN 46580 or to Knights of Columbus Council 4511, PO Box 988, Warsaw, IN 46581 “Tootsie Roll Drive” in memo line. Written condolences may be left for the family at www.TitusFuneralHome.com

To order memorial trees or send flowers to the family in memory of Johnny Ray Belcher, please visit our flower store.