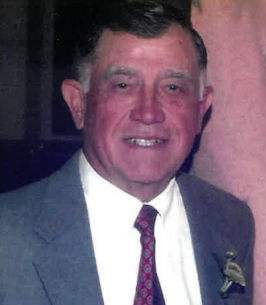 John was the son of Harry and Bertha (Snell) Lozier, the 6th child of 8 siblings. He graduated from Leesburg High School with the class of 1953, and from Manchester College in 1957. He earned a Masters+ from Ball State University. Marrying Barbara Long in 1956, they had two sons, John (Mark) and Kevin. Together, they spent many years working in the Logansport School District and raising their two sons.

John began his career as a Physical Education teacher and coach but devoted much of his working life to teaching Math, mostly algebra and pre-algebra, for a total of 36 years. Among those 36 years of teaching, his first was at Leesburg HS, then 3 years each at Swayzee and Washington Township, 7 at Lewis Cass and his final 22 were spent at Logansport from where he retired in 1993. When asked what he most liked about teaching, he responded ‘the personal contact with the students that are preparing for the future, and the eagerness to learn’ in most of his students.’

John had a passion for all sports, but particularly for basketball. As a 1953 graduate of Leesburg, he was an outstanding basketball player for the Blue Blazers and scored 705 points in his career. Over the years he coached HS basketball, cross country, track and football. Also, coaching both of his sons in little league baseball as well as every other sport in the backyard. He went on to have an outstanding career as a basketball official in Indiana, working 24 Sectionals, 19 Regionals, 10 Semi-States, and 2 State Finals.

John loved his family above all else. He was an extremely proud member of the Lozier family from Warsaw, attending yearly family reunions and carrying on the traditions and family values set forth by his beloved parents. He believed in the core values of family, faith, and hard work. He was a devoted member of the Church of the Brethren in Logansport, attending weekly with his wife and children for many years.

John loved his retirement years, settling into a simpler life on his property in Birchwood, WI. He was an avid fisherman, supplying his family and friends with Perch and Blue Gill filets regularly, much to their delight and appreciation. He loved the outdoors and his dogs, Bebo, Harry and Bear. He was well known in the community of Birchwood, befriending many and supporting most of the local businesses.

In his later years, John spent much of his time in the flea market business, building a name for himself in the process. He travelled extensively in the South, looking for finds and treasures, and supplying his building in Birchwood with various items for sale.

He is survived by his sons Mark (Linda) of Hinsdale, IL and Kevin of W Terre Haute, IN ; six grandchildren: Travis (Alyssa) of Westfield, IN, Chris (Rachel) of W Terre Haute, IN, Alexandra, John, Michelle and Claire of Hinsdale, IL; seven great-grandchildren: Alivia, Ryder, Nash, Dexter, Jaxson, Bruce and Max; brothers: Don (Miné) Lozier of Warsaw and Joe Lozier of Pierceton; sister, Helen Williams of Kalamazoo, MI; brother-in-law, Carl Hudson of San Jose, CA and sister-in-law, Christine Haney of Warsaw. In addition to his parents, he was preceded in death by his three brothers, Dean, Carl and Robert Lozier and by sister, Retha Hudson.

The family will receive friends for a time of gathering and for viewing on Saturday, April 24th from 12 to 2 p.m. at Titus Funeral Home, 2000 East Sheridan Street, Warsaw. A short funeral service will be held at 2 p.m. in the Funeral Home. Pastor Michael Smith of North Winona Church of the Brethren will officiate with burial in Warsaw’s Oakwood Cemetery.

Although flowers will be accepted, memorial gifts may be made to North Winona Church of the Brethren, 2475 East 100 North, Warsaw, IN 46582. To sign the guestbook or send online condolences, please visit www.TitusFuneralHome.com.

To order memorial trees or send flowers to the family in memory of John Lozier, please visit our flower store.