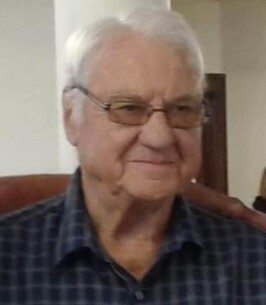 John Henry “Jack” Anglin, Sr. age 100 of Clunette, passed away peacefully on Monday, March 14, 2022 in his home. He was born in Warsaw on November 21, 1921, the son of Washington and Grace Anglin. Jack graduated from Atwood High School in 1937. Jack went on to serve our country as a Sergeant in the United States Army, Company E, 78th Lightning Division of the 311th Infantry, Cannon Company. He saw action in the Battle of the Bulge, Hurtgen Forest and the capture and defense by the Allies of the Remagen Bridge, a turning point in WWII. On December 31, 1941, he married Bette Mikesell in Winona Lake. They have four children: John, Jr.(deceased), Neal, Beth, and Sarah.

Jack and two of his seven brothers founded Clunette Elevator, Inc. in 1951.

Jack served others his whole life. He was an active member of Clunette United Methodist Church, founding member of Atwood Lions Club, Past Master Mason of the Blue Lodge, Plymouth and the American Legion, Post 49, Warsaw. He was past president of the Indiana Grain Dealer’s Association and of the Kosciusko County Fair Board. Jack supported the Kosciusko County Historical Society, serving as guide in the Jailhouse Museum. He drove cancer patients to appointments, Amish to Red Cross Blood Drives, and children to Shriner’s Hospital in Chicago. He was sexton of Stony Point Cemetery from 1955 to 2013.

Jack’s arrangements have been entrusted to Titus Funeral Home and Cremation Services, 2000 East Sheridan Street, Warsaw where friends may gather for visitation on Friday, March 25, from 4 to 7 p.m. At 7 o’clock, there will be a masonic ceremony, led by members of the Plymouth Kilwinning Lodge. Jack’s funeral will be at 11 a.m. on Saturday, March 26 at Clunette United Methodist Church, 4227 W 600 North, Leesburg. Burial with military honors will follow at Stony Point Cemetery.

In lieu of flowers, the family requests that donations be made to one of five charities of the many which Jack supported: Clunette United Methodist Church, Salvation Army of Warsaw, Stony Point Cemetery, Kosciusko Home Care and Hospice or Chicago Shrine Hospital. Condolences may be left at www.TitusFuneralHome.com

To order memorial trees or send flowers to the family in memory of John Anglin Sr., please visit our flower store.