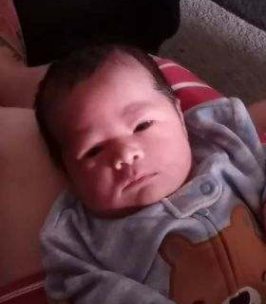 Jett Riley Sizemore, the son of Jerika (Aker) Sizemore and Jason Sizemore of Warsaw, passed away unexpectedly at home on Friday, January 8, 2021.

Merely four days old, Jett was born on January 4, 2021 in Parkview Whitley Hospital, Columbia City. He was healthy and measured 19.75” while weighing 8 pounds. His addition to the Sizemore house brought much happiness and laughter especially at his little, diaper-clad butt. In his short time here, he never expressed discontent; he was a happy baby. He was sleeping and eating regularly.

A Life Celebration® is planned for Jett with Warsaw’s Titus Funeral Home. Private visitation and funeral services will take place later this week with interment in Oakwood Cemetery, Warsaw.

Memorial gifts may be directed to the family in care of Titus Funeral Home, 2000 East Sheridan Street, Warsaw, IN 46580 or may be given through Jett’s obituary page at www.TitusFuneralHome.com where written condolences may be left, also.

To order memorial trees or send flowers to the family in memory of Jett Riley Sizemore, please visit our flower store.