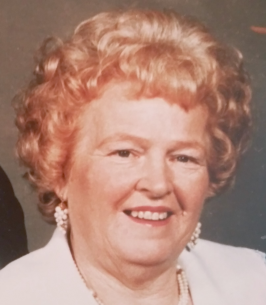 She was born on August 4, 1933 to Cloyce and Bernice (Detwiler) Hoffer in Nappanee, IN. She grew up in the area and graduated from Etna Green High School in 1951.

Janet was a military spouse following her high school graduation. She volunteered and helped with military spousal duties whenever her primary role as a devoted mother to her seven children would allow. In addition to her role as mother, she also worked outside the home at Da-Lite Screen, Walmart, and waitressing to provide for her beloved family.

On July 21, 1978 , Janet was united in marriage to the love of her life, Ronald P. Buchholz. The pair spent nearly 43 happy years together.

Janet was a member of Leesburg United Methodist Church, the Dorcas Sewing Circle, and a lifelong member of T.O.P.S. (Take Off Pounds Sensibly). She enjoyed nature, time in the sun, flower gardening, sewing and crocheting. She especially enjoyed music in the park and time spent with her family and friends at her August birthday celebrations.

Warsaw’s Titus Funeral Home is assisting the family, although no services are planned at this time. Those wishing to express their sympathy may give to Kosciusko Community Senior Services, 800 North Park Avenue, Warsaw, IN 46580. Written condolences may be left for the family at www.TitusFuneralHome.com
To order memorial trees or send flowers to the family in memory of Janet Buchholz, please visit our flower store.