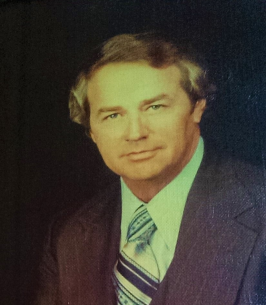 James Alfred Garland, age 87 of Warsaw and previously of Marion, Indiana, passed away on Tuesday, June 1, 2021 in Fort Wayne at Lutheran Hospital.

The son of funeral directors Donovan and Ruth (Bahr) Garland, James was born in Lawrence County on May 7, 1934. He spent his formative years in the Evansville area and graduated from Evansville’s Central High School.

Professionally, Jim, as many knew him, was the owner/operator of Water Consultants where he consulted on municipal water projects. He was also previously a deputy town marshall (when he lived in the Marion area) and served on the Silver Lake town board where he assisted with many projects.

Jim was a hard worker and meticulous in his work habits. He was able to build or fix nearly anything. One of his favorite projects was his 1986 Chevrolet El Camino; burgundy and silver, it was his pride. He loved taking the grandkids for El Camino rides and showing it off. He also liked crossword puzzles and conservative talk radio like Rush Limbaugh.

Warsaw’s Titus Funeral Home has been entrusted with Jim’s final care. No services are planned at this time. Memorial gifts may be directed towards his final expenses; checks may be written to Titus Funeral Home. Written condolences may be left for the family at www.TitusFuneralHome.com
To order memorial trees or send flowers to the family in memory of James Garland, please visit our flower store.