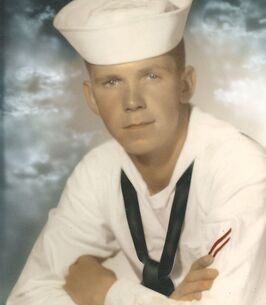 James Edward Fugate, of Warsaw, passed away unexpectedly in his home on Sunday February 6, 2022, at the age of 76.

Born in Saldee, Kentucky on January 16, 1946, he was the son of Walter and Evalee (Farler) Fugate. Jim attended school in Kentucky until he was 16 and with permission joined the United States Navy in 1963. He served as a radarman and earned a technical certification while he was stationed on the U.S. England 2 during the Vietnam War. In 1967, he worked for the railroad. Jim bought a little house and settled in Warsaw in 1968 when he began working at Kimble Glass. In 1971, he married Yvonne “Vonnie” Sumpter. Jim and Vonnie ad a daughter in late 1973 and her death in 1975 left wreckage scattered all around the two survivors. Many coworkers and friends helped Jim during the first few years on his own.

Jim worked at Kimble Glass for many years until his retirement in 2001. He worked there with 2 of his brothers and many golf buddies and other friends. He loved to fish on his boat or the shores of the many local lakes. He also enjoyed hunting, and gardening, but he loved to golf. He played at Rozella Ford for many years in tournaments with his friends. He taught his daughter about the game he loved to play. He set her up with clubs as early as possible - modifying clubs and re-gripping them to suit my size. And he took his daughter golfing. They spent time on the course walking and talking and he would teach and encourage her and they had fun competing and laughing. He spent a lot of time golfing with his daughter.

In 1979, Jim married for a second time there were no children produced in the 2nd union. Jim and his second wife divorced in 1988 and Jim remained a single parent / widower until his passing.

Jim moved to his dream home in 1987. He had woods, a pond, privacy, wildlife - he was proud and happy and spent a lot of time mowing in between raising his daughter working and his outdoor hobbies. His love, devotion, selfless generosity, and perseverance through tragedy and personal demons inspired his family. Jim also enjoyed hunting fishing, and gardening. Jim continued to maintain Vonnie's grave site for 46 years by refreshing the urns and flowers in May.

Those who survive to cherish his memories are his daughter, Heidi (Fugate) Balanow; and sisters, Norma (Kevin) Fugate Gipson and Carol Caudell. He is further survived by many nieces, nephews, extended family member and friends. He is preceded in death by both parents; his wife, Yvonne; 3 brothers, Bill Fugate, David Fugate, and Gary Fugate; and half brothers and sisters, Rosella, Arbutus, Ruby, Jessie, Junior, Vincent, and Pauline.

Titus Funeral Home and Cremation Services, 2000 E. Sheridan St. Warsaw, IN 46580, is entrusted in the care of Jim. Friends and family may gather there on Monday February 14, 2022, from 2:00 PM until 4:00 PM. The Life Celebration® will begin at 4:00PM with Titus Funeral Home’s Sharon Brockhaus officiating.

To order memorial trees or send flowers to the family in memory of James Fugate, please visit our flower store.