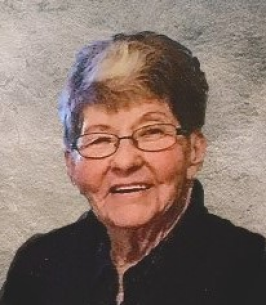 Jackie Whitaker, age 85 and a longtime resident of Warsaw, passed away at home on Saturday, November 20, 2021.

Born Jacqueline Bernice Kreighbaum, Jackie was the daughter of William Kreighbaum and Belva (Madlem) Kreighbaum. She was born in Miami County near Gilead on June 5, 1936 and spent her formative years there, graduating from Gilead School in 1954. On February 22, 1959, Jackie was united in marriage to Earl Whitaker whom she met at his workplace, a local gas station.

The pair moved to Warsaw after several years of marriage and were the co-owners of a filling station where Jackie was the first female attendant in Kosciusko County. Some may remember her from General Tire where she worked for more than 17 years.

Jackie was fun loving and had a heart for animals especially dogs, frogs, and turtles. She collected chicken décor and had two dogs of her own, Boston Terriers, Princess and Daisy. She enjoyed Euchre, gardening and was a member of Warsaw Community Church.

Perhaps her favorite times were those spent with family. Jackie loved her family dearly and time spent with them was precious to her. Those who survive with memories to cherish include husband of more than 62 years, Earl Whitaker; son, Shawn (wife, Jennifer) Whitaker of Warsaw; two granddaughters: Alyson (husband, Cameron Deel of Fort Wayne and Madison (fiancé, Chandler Pittman) Leedy of Mishawaka and three sisters: Shirley Hunter of Silver Lake, Bonnie Slone of Warsaw and Karen (husband, Ted) Leiter of Akron. She is also survived by a host of brother and sisters-in-law, nieces, and nephews. She was preceded in passing by brothers, Billy and Jerry Kreighbaum and their parents.

Memorial gifts may be directed to Heart to Heart Hospice with envelopes available at the funeral home.

To order memorial trees or send flowers to the family in memory of Jacqueline Whitaker (Kreighbaum), please visit our flower store.