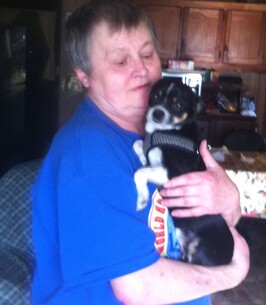 On February 14, 1967, she married Larry Howard, who survives. Helen spent time caring for others by working in nursing homes for over 43 years. In addition to her husband, she is survived by her sons; Rodney (Joy) Howard of Fort Wayne; David Howard and Marc “Tony” Howard of Warsaw. Her sisters: Shirley Patton and Rachel Cox both of Wolcottville, IN; Sara Jackson of Kendallville, IN; Phyllis Bailey of Hippo, KY; and brother, Tim Prater of Emmalena, Kentucky, along with her dog, whom she loved, Digger.

Helen was preceded in death by her parents, one sister; Brenda and one brother; Vincent.

The family has asked that memorial gifts be directed toward the Donor’s choice. Written condolences may be left for the family at www.TitusFuneralHome.com
To order memorial trees or send flowers to the family in memory of Helen Howard (Prater), please visit our flower store.