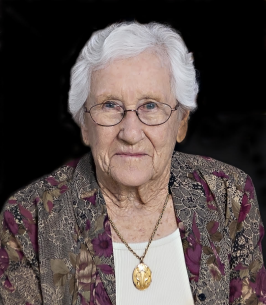 Lucille was born on November 24, 1924 in Atwood to Fred and E. Fern (Yeiter) Williamson. She was a 1942 graduate of Atwood High School. Lucille received a certificate from South Bend Business School, and then she worked at the South Bend Supply Company in the office.

On November 25, 1944, Lucille married Glenn W. Grimm at the Fort McClellan Army Base, Anniston, Alabama. Glenn served in the army during World War II. After Glenn returned from the war, they farmed with Glenn’s parents, Harvey and Lenora Grimm. They purchased their own farm near Atwood and began their family.

Lucille was a loving, dedicated wife, mother, and grandmother. She was a lifetime member and active participant at the Atwood Aldersgate United Methodist Church. She was a member of the United Methodist Women and Prairie Home Ec Club. Lucille loved to crochet, quilt, and sew. Her family has many of her beautiful handmade creations. When wintering in Florida with Glenn, she enjoyed playing shuffleboard and golf with their friends. They travelled extensively around the United States when they retired.

Titus Funeral Home is assisting the family. Private services will be held on Thursday, December 31, 2020 with a 12:30 Live Stream available to the public through Lucille’s obituary page at www.TitusFuneralHome.com

In lieu of flowers, gifts in Lucille’s memory be given to K-21 Foundation, Cancer Care Fund c/o K21 Health Foundation 1101 Park Avenue Winona Lake, IN 46590. Written condolences may be left and the Live Stream viewed at www.TitusFuneralHome.com

To order memorial trees or send flowers to the family in memory of H. Lucille Grimm, please visit our flower store.