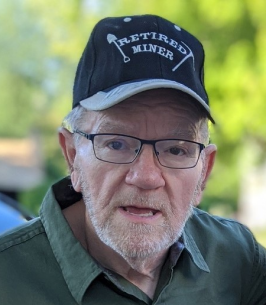 Harold G. Marcum, Sr., age 76 and a longtime resident of North Manchester, passed away quietly at home while surrounded by his loving family on Friday, January 1, 2021.

Born in Logan, West Virginia on October 6, 1944, Harold was the son of James and Nannie Marcum. He grew up in West Virginia and was married there to Jo Ann Chafin on July 1, 1963; that same year the pair moved to North Manchester.

Harold was a hard worker who would help almost anyone without asking for favors in return. He enjoyed tinkering and working on cars, canoeing, shooting guns and collecting knives. He was a storyteller and a jokester at heart and liked watching Westerns. Professionally, Harold dedicated more than 40 years to North Manchester Foundry.

Friends may join family for a visitation on Tuesday, January 5, 2021 from 4 to 6 p.m. at Full Gospel Tabernacle Church, 250 North Main Street, Claypool where Harold was a longtime member. Pastor John Dotson will officiate Harold’s Funeral beginning at 6 p.m. On Wednesday at 11 o’clock, a graveside service will be held at Claypool’s Graceland Cemetery. Titus Funeral Home is assisting the family.

Memorial gifts may be given to the family to assist with headstone and final expenses. Condolences may be left for them at www.TitusFuneralHome.com.
To order memorial trees or send flowers to the family in memory of Harold Marcum Sr., please visit our flower store.

Interment will take place on Wednesday, January 6 in Claypool's Graceland Cemetery following a graveside at 11 a.m.