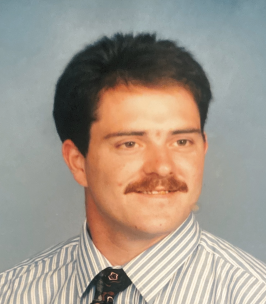 Guss Jay Denna, age 52 and a resident of Pierceton, IN, passed away quietly on Monday, August 23, 2021 at 7:15p.m. in Peabody Retirement Community. He had battled Alzheimer’s for several years.

Born in Lake Tahoe, California on January 4, 1969, Guss was the son of the late Glen Denna and the late Virginia (Moody) Denna. He spent his formative years in nearby Gardnerville, Nevada and graduated there from Douglas High School. On June 4, 1996, Gus was married to Angela Britton. She survives in Pierceton.

An ornery person with a fun-loving personality, Guss was a machinist at Biomet for many years. He enjoyed time spent outdoors and loved hunting and fishing. He also enjoyed watching football, especially the Colts and Broncos. He was a huge fan of Peyton Manning. He also enjoyed UFC fights and was an honorably discharged veteran of the United States Army.

In addition to his wife, Angela, those who survive include three children: daughter, Amanda (Aaron) Webb of Roanoke, IN and sons, Nathan and Dakota Denna of Pierceton, IN. He is also survived by 10 siblings and was preceded in passing by one sister, in addition to his parents.

Friends may join the family for a time of visitation and viewing at Titus Funeral Home and Cremation Services, 2000 East Sheridan Street, Warsaw, IN on Sunday, August 29, 2021 from 1 to 3 p.m. Beginning at 3 o’clock, Titus Funeral Home’s Sharon Brockhaus will officiate Guss’ Life Celebration® service. Burial will be in South Lake Tahoe, California at Happy Homestead Cemetery.

Memorials be made directed to Mollenhour Conservation Camp, 10265 South 600 West, Silver Lake, IN 46982. Condolences may be left for the family at www.TitusFuneralHome.com
To order memorial trees or send flowers to the family in memory of Guss Denna, please visit our flower store.