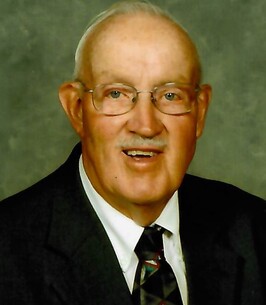 Gerald L. Lucas, a resident of Warsaw, passed away on Friday, July 16, 2021 at Grace Village Rehab in Winona Lake. He was 89 years old and was planning to celebrate his 90th birthday in August.

Born in Jay County, Indiana, Gerald was the son of the late Carl Lucas Sr. and Gladys (Marshall) Lucas. He was one of eight Lucas children and was a 1949 graduate of Petroleum High School in Wells County. He spent his formative years there and learned the value of hard work at an early age.

Professionally, Gerald was a dairy farmer. He spent more than fifty-five years caring for and milking cows. He also worked in heating/cooling for some time, working with Ginter Electric and Miller & Sons. Even into his 80s, Gerald was working, helping wherever he was needed at Clunette Elevator.

A loving but occasionally stubborn person, Gerald loved his family deeply. He and his wife, Doris L. proudly raised four of their own children and fostered two more. Doris preceded him in passing in December of 2018 though their legacy of love continues in 12 grandchildren and 20 great-grandchildren.

Survivors include son: Les (Doris A.) Lucas of Warsaw; three daughters: Deb (Paul) Tharp, Mindy Tharp and Trish Hernandez – all of Warsaw; 12 grandchildren; 20 great-grandchildren; brother, Carl Jr. Lucas and sisters: Pearl Fischer, Cora Barger and Wilma Terhune. In addition to his wife, Doris with whom he shared 67 years, he was preceded in death by brother, Richard Lucas and two sisters, Helen McFarren and Wannita Bennett.

A Life Celebration® is planned with Titus Funeral Home of Warsaw, 2000 East Sheridan Street, where friends may gather on Tuesday, July 20, 2021 from 3 to 7 p.m.. On Wednesday at 10 a.m., Pastor Glen Crouse (ret.) will officiate Gerald’s funeral service with burial at Pleasant View Cemetery.

In lieu of flowers, the family would appreciate gifts made to Riley Children’s Hospital Foundation, 30 S. Meridian Street, Suite 200 Indianapolis, IN 46204. Written condolences may be left at www.TitusFuneralHome.com

To order memorial trees or send flowers to the family in memory of Gerald Lucas, please visit our flower store.