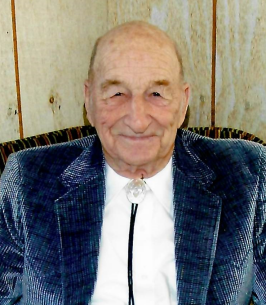 Born Gerald D. Dausman, Jetty was the son of Vern and Martha (Hapner) Dausman. He was born on October 11, 1928 near Oswego and spent much of his adult life in the Oswego and Leesburg area. He was a 1947 graduate of Leesburg High School where he played Blazer Basketball throughout his school years.

Jetty thoroughly enjoyed basketball, playing in independent leagues and church leagues for many years. He also played softball and baseball and was a fan of IU Basketball. He enjoyed the outdoors, hunting, fishing and was a straight shooter with a dry sense of humor. He also enjoyed horses and had his own farm, Redwood Arabians, for many years; some may remember him from parades or from the time his stallion won Indiana State Point Champion.

Jetty was a hard worker, a trait he developed at an early age, milking cows on the family farm, bailing hay and picking up odd jobs for extra money. He later worked for Bendix in South Bend and for Petro’s Foundry though he spent much of his working life operating bulldozers for his company, Dausman Dozing.

Blessed to find love twice, Jetty was first married to Gloria Kinzer in 1948. The pair shared more than 40 years together before her passing in 1990. Later, he was married to Glennis Gregory though she also preceded him in passing after 24 years together. Also preceding him are two brothers, Glen Dausman and Willard “Bill” Dausman; sister, Lois Dausman and daughter-in-law, Connie Dausman. Those who survive with memories to cherish include three sons: Terry Dausman, Dennis (Karen) Dausman, and Scott (Elaine Reed) Dausman; seven grandchildren; 11 great-grandchildren; two great-great-grandchildren and brother, Everett (Maddie) Dausman. In addition, three step-sons survive: David (Gaylynn) McKay, Brian McKay and Gerald Gregory.

A Life Celebration® is planned with Titus Funeral Home, 2000 East Sheridan Street, Warsaw where friends may gather on Wednesday, July 21, 2021 from Noon to 2 p.m. Beginning at 2 o’clock, Pastor Bob Rice (ret.) will officiate Jetty’s funeral service with burial to follow in Leesburg Cemetery.

In lieu of flowers, gifts may be made to New Salem Church of the Brethren where Jetty attended for many years. Gifts by mail should be sent to PO Box 37 Milford, IN 46542.


To order memorial trees or send flowers to the family in memory of Gerald "Jetty" Dausman, please visit our flower store.