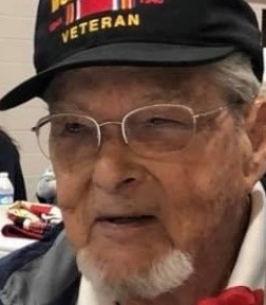 Gaylord “Gale” W. Williams passed away peacefully at Millers Merry Manor- Warsaw on Thursday, October 21, 2021, at the age of 95.

Born on November 12, 1925, in Huntington County, IN, he was the son of Harry C. and Lucy (Ebert) Williams. After graduating from Wolf Lake High School, he served our country in the United States Army during World War II. During his service he served in the European Theater and received two battle stars. After his military service, he worked in motor transport sales for over 30 years, retiring in 1987.

Gale married the love of his life, Mercedes (Heitz) Williams on Sept. 11, 1949. They raised their family in Huntington and then moved to Warsaw on Chapman Lake in 1972. They also spent winters in Florida for 30 years. He loved to fish, camp, golf, wood carve and travel. (48 states) He spent all of his time with his family on the lake and he went to just about every sporting event for his grandkids. He was their biggest fan. He is known for being the “life of the party, prankster and never knew a stranger.

Titus Funeral Home and Cremation Services is assisting the family. Friends and family are welcome to gather for visitation from 1:00 PM until the Life Celebration® at 2:00PM on Sunday, October 31, 2021, with Titus Funeral Home’s Sharon Brockhaus officiating. Immediately following his service, Gale will be laid to rest at Lancaster Cemetery. Military Honors will be overseen by members of the American Legion and the U.S. Army. To make a donation is Gale’s honor, memorial gifts are appreciated to the Animal Welfare League, 1048 S. 325 E., Pierceton, IN 46562 or the Honor Flight Northeast Indiana, PO Box 5 Huntertown, IN 46748.


To order memorial trees or send flowers to the family in memory of Gaylord Williams, please visit our flower store.