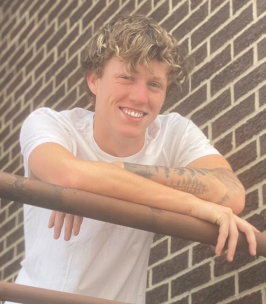 Easton Adkins, age 19 of Columbia City, passed away unexpectedly on May 18, 2021 at Parkview Regional Medical Center in Fort Wayne. His passing was from injuries sustained in a motor vehicle accident.

Born on March 28, 2002 in Columbia City, Easton was the son of Chad Adkins and Landis (Woodward) Adkins. He was a student at Columbia City’s Eagle Tech and was looking forward to following a calling to ministry; following graduation, Easton planned to travel to Hawaii to continue his education. He was also looking forward to the fishing, as it was one of his favorite activities, but was especially excited to serve the Lord and to serve others.

A hard worker, Easton had worked at Miller Sewer and Drain before working for New Market grocery in North Webster. He recently accepted a new position at Dunham’s Sporting Goods in Columbia City. This was fitting as Easton loved the outdoors and was looking forward to learning to surf, wind-surf and cliff dive.

A family friend remembered:
Easton passes on a legacy of peace, unity, faith, forgiveness, joy, hope and love. Many experienced peace that passes understanding while in Easton’s presence. His life brought unity, sometimes for the first time, sometimes re-uniting. Faith was stirred in the hearts of individuals and communities, believing for the MORE for Easton's life and possibly their own. Some were led to forgive one another. Others? Themselves. Some were led to be forgiven, and begin walking in the new life Easton was determined to let others know they too could walk in. Joy dwelt amidst sorrow, recalling or imagining Easton’s humorous facial expressions or unique dance moves. Many held on to hope, newfound or a familiar anchor, for the miraculous. Love flowed in his room between two in an embrace; sometimes five in a lobby or prayer circle; sometimes as close to twenty-five souls prayed on the floor of a hospital chapel; another time as nearly fifty held hands united around Easton’s life. Those close to Easton, and several large communities, are now blessed with the honor of carrying forth the torch, or substantial gifts, passed on by Easton’s life.

Titus Funeral Home is assisting the family. Friends may gather to support them on Thursday, May 27 from 2 to 8 p.m. at First Church of God, 1200 Depoy Drive, Columbia City. Easton’s Life Celebration® will be held in the church on Friday at 1p.m. Pastor Mike Drury of Pine Hills Church will officiate with burial in Troy Presbyterian Cemetery.

Memorials may be given to the family to assist with final expenses. Excess memorials will be used to assist others who feel called to ministry. Checks payable to Titus Funeral Home, 2000 East Sheridan Street, Warsaw, IN 46580. Condolences may be left at www.TitusFuneralHome.com

To order memorial trees or send flowers to the family in memory of Easton Adkins, please visit our flower store.

Troy (Across from Presbyterian Cemetery)