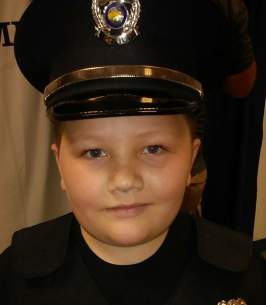 Drake Michael Alan Price, age 16 of Warsaw, passed away on Friday, January 7, 2022 at home. His passing was unexpected and leaves his family heartbroken.

Born on November 22, 2005 in Kendallville, Drake is the son of Miles “Billy” Price and Charity (Helbert) Price. He grew up in Warsaw, attending Lincoln Elementary, Lakeview Middle School and Warsaw Community High School where he is currently enrolled as a freshman.

From an early age, Drake took an interest in emergency services, especially in police work. In 2017, Drake was appointed Honorary Police Officer by the Warsaw Police Department. WPD, and several other police agencies, wrapped their arms around Drake’s family when he was diagnosed with a serious brain tumor.

In spite of his brain tumor and several major surgeries, Drake was very much a normal sixteen-year-old. He loved making others laugh and had a great sense of humor. He enjoyed playing cards with his family, fishing, visiting his grandparents and collecting police memorabilia. Drake had amassed a sizeable collection of patches, badges and challenge coins; they adorned his room and clothing, Drake displayed them and wore them with great pride.

A Life Celebration® is planned with Titus Funeral Home, 2000 East Sheridan Street, Warsaw where friends and family will gather on Tuesday, January 11th from 2 to 8 p.m. On Wednesday, Drake’s funeral will be held at Warsaw Community Church, 1855 South County Farm Road, Warsaw where Drake accepted the Lord and was baptized in 2016. The funeral will begin at 10 a.m. with doors open for one hour prior. Burial will take place in Sweet Cemetery, near Albion. Pastors Jeff Pfeiffer and Layne Sumner will officiate.

Written condolences may be left at www.TitusFuneralHome.com Memorial gifts may be directed to the family, c/o Titus Funeral Home.


To order memorial trees or send flowers to the family in memory of Drake Price, please visit our flower store.