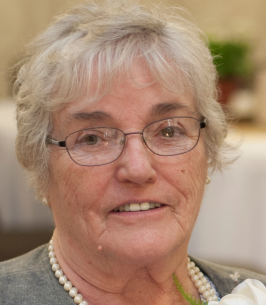 Dorotha Lawlor, age 87 and a longtime resident of Kosciusko County, passed away quietly at Grace Village Retirement Community in Winona Lake on Sunday, August 29, 2021 at 9:07 pm.

Born Dorotha Jean Siverd on April 5, 1934, in Green Township, Pennsylvania, Dolly, as most knew her, spent her formative years in eastern Pennsylvania. She was a 1952 graduate of Green Township High School and was married to the love of her life, Lawrence “Larry” Lawlor, on August 15, 1953, in Commodore, PA; shortly after, the pair moved to Winona Lake. It was in Warsaw they lived and raised their children.

Dolly was a talented seamstress and a kind, genuine person. She was a longtime member of Fellowship Baptist Church where she taught Sunday School, sang in the choir, and served as an AWANA leader. She was an amazingly creative cook and an avid reader. Dolly enjoyed hosting, serving and corresponding with missionaries around the world. More than anything else, Dolly cherished her family and made many lifetime friends because of her open heart. To know her was to love her. She loved the Lord Jesus Christ with her whole heart and shared her faith in word and deed.

Titus Funeral Home and Cremation Services, 2000 East Sheridan Street, Warsaw, is assisting the family. Due to the current state of the health crisis plaguing our communities, private services will be held. A memorial service for friends and family is in the planning stages; it will be held at a safer time. If you would like to share a special memory or have a story you’d like to share with the family, you may send it to babushkadebbie@gmail.com A private burial will take place at Oakwood Cemetery, Warsaw.

To order memorial trees or send flowers to the family in memory of Dorotha "Dolly" Lawlor (Siverd), please visit our flower store.