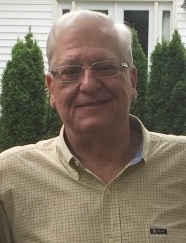 David William Cotton, beloved son, brother, husband, father, and grandfather passed away in his Brownsburg, IN home November 15, 2021. He was born January 7, 1947 to Anna (Marsh) And Elbert Cotton Sr. in Elwood, IN. David resided in Syracuse for more than 25 years after moving there from Morristown, NJ. He co-founded Cotton & Cotton Insurance (now Northern Lakes Insurance) in 1982 and retired from there after selling to Ron Beasley in 2005.

David’s elder sisters “taught” him to swim from their rowboat to a nearby pier on Lake Tippecanoe as a child, and befitting his demeanor, he embraced the challenge and completed the task. Despite this introduction he fell in love with this area’s lakes and held it close to his heart. It’s why he always considered it “home” though he moved and traveled often.

David took that mindset from his swim lesson into all he undertook. Faced with becoming a Father his junior year at Wabash College, he learned to sell life insurance to be able to finish school and pay for his new family. It became his chosen profession even before graduation, accepting positions in Fort Wayne and then Muncie. Standing up to his sales manager’s tactics when his second son was on the way, he was given the managerial reins and built Metropolitan Life’s top sales unit in the Midwest Region at age 24. When his boss accepted a position with CNA Insurance he took David along with him. David was tasked with building CNA a new distribution chain for their property and casualty and bond division on the east coast. David was just 29. On par with his previous position he built a top tier team at CNA which entailed travel throughout the country growing his team and training his peers.

Despite his extensive travel for work, David rarely missed his sons’ games or performances. His assistant’s most important job was to schedule trips with the boys’ schedules in mind. It wasn’t uncommon for him to have a layover in Newark just long enough to run to a game or recital and then catch a late flight back to work.

David embraced the lifestyle Morristown, NJ afforded he and his family. A history buff, the home base of Washington’s Headquarters and a territory which encompassed much of the Revolutionary War’s footprint allowed him to learn along with his boys. The proximity to New York City offered wonderful cultural experiences and David relished taking family and friends into “The City” for dinner, sightseeing, and the theater.

By age 35 David felt it was time to come closer to home for his family. He chose to form a new insurance agency, and, like his swimming lesson so many years ago, faced a daunting task in the lakes area where he knew very few people. It didn’t take long for the agency to become an area leader. David was firmly committed to the independent agency model that it still operates under today.

David lost his father at age 9 and it affected his mindset about mentoring and guidance for the rest of his life. All one has to do is ask the friends of his sons whose own fathers weren’t around; David helped them all. He was an avid reader and generous to a fault. He played as hard as he worked, and enjoyed nothing more than a friendly golf match with his buddies. Never a low handicapper, “Big Dave” sure knew how to choose partners and place his bets - just ask those who’ve beaten him and still had to pay up!

On January 26, 2002 David married Nancy (Caldwell) Cotton. Together they split their time between the lake and the Indianapolis area before settling in Brownsburg.

Cremation will take place at Cremation Services of Kosciusko County, 4356 N. St. Rd. 15, Warsaw, IN. Visitation will be from 1:00 – 3:00 p.m. on Sunday, November 21, 2021 at Owen Family Funeral Home, 1001 S. Huntington St., Syracuse, IN. Memorial services will follow at 3:00 p.m. on Sunday in the funeral home with Pastor Mike Beezley of the Clunette United Methodist Church officiating.

Preferred memorials may be given to the National Alliance on Mental Illness, 4301 Wilson Blvd., Suite 300, Arlington, VA 22203 or http://www.liteinkcj.org/ (LITE in KCJ).

To order memorial trees or send flowers to the family in memory of David W. "Dave" Cotton, please visit our flower store.