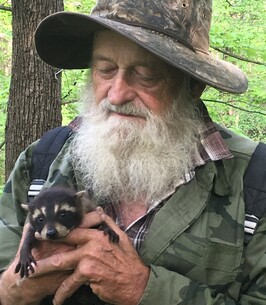 He was inducted into the army February 4, 1969 in Fort Knox, Kentucky before moving on to Fort Polk, Louisiana for AIT Training. On July 3, 1969, he was on his way to Vietnam, returning home in September 1970. Upon returning home, he met his daughter, Danita, for the first time.

Dan began working for Bockman’s Greenhouse and Floral Shop at the age of 13. He then started working at Zimmer in October 1971 in the maintenance department and retired in 2010 after working there for 39 years. He also owned Boggsz New Lawns, which turned into Boggs Tree Transplanting for 46+ years and Holiday Pen Country Boarding Kennel for 16 years.

Danny Boggs and Tamara “Tammy” Sutton were married on March 14, 2005 in Sevierville, Tennessee. They lived in Warsaw and soon purchased 36 acres of land in Claypool where Dan and Tammy enjoyed the woods, hunting and fishing.

He has three granddaughters: Tory (Denis) Samardzic of Fort Wayne, Devin Boggs and Avery Boggs of Warsaw; one grandson, Nash Keirn of Warsaw; one great-granddaughter, Ajla Samardzic of Fort Wayne and a half-sister, Margie Carpenter of Peru. He also has two step grandchildren: Preston Susie of Noblesville, Indiana and Lochland Susie of Noblesville, Indiana.

Dan was preceded in death by his parents; an infant son, D.J. Boggs; two half-sisters: Darlene Phillips and Vonda Wheeler and a half-brother, Freddie Boggs.

More than anything, Dan was a nature lover, deer hunter, trapper and an avid mushroom hunter.

A Life Celebration® is entrusted to Warsaw’s Titus Funeral Home, 2000 East Sheridan Street where visitation will be held on Monday, February 1, 2021 from 3 p.m. to 7 p.m.. On Tuesday at 11 am, Pastor Gary Colby will officiate Danny’s service at Salem Community Church in Wilmot, Indiana. Burial will follow with military honors in Salem Cemetery.

Memorial gifts may be directed to Danny’s family to help cover final expenses. Condolences may be left for the family at www.TitusFuneralHome.com

To order memorial trees or send flowers to the family in memory of Danny Boggs, please visit our flower store.