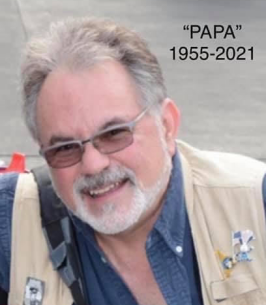 Dan Caffoe, 65, fought the good fight against a rare brain tumor called gliosarcoma. He will always be remembered as a wonderful and loving husband, father and Papa. Always a leader, he finished as he began life. With the onset of the fatal diagnosis and throughout his subsequent suffering, he took the time to demonstrate one last example to his family and friends. That is, how to most graciously pick up the cross God gave him and how to most humbly carry it to the finish line.

Dan was born in Georgia at Fort Benning Army base, to Ronald and Loretta Caffoe on March 17, 1955. Shortly after his birth, they moved permanently to New Castle, Indiana, where Dan grew up throughout his childhood, the oldest of five children. Dan became a professional golfer after High School and worked as an assistant pro in Florida and then the head pro in Findlay Ohio. He later purchased Norwood Golf Course in Huntington, Indiana where he met and married his loving wife, Missy Risser Caffoe.

Dan loved working with and for people to better their lives. He was a successful entrepreneur and owned or partnered in many businesses including Clark’s Recycling, ImQuest Life Sciences, BioSciences and Pharmaceuticals, and as an Independent Insurance Agent.

Dan had many hobbies and interests that he shared with his friends and family. Some of his greatest days were spent at Disney World with his children and grandchildren. His laugh was contagious and it often appeared when he was with his loved ones. Cooking burgers or prime rib for 10 to 200 people came naturally and everyone who got to partake never left unsatisfied!

Dan loved constructing model airplanes and showcased hundreds of complicated designs in his offices at home and at work. He loved the Chicago Cubs, fine wine, war movies, museums, coins, great bourbons, fishing and above all… his faith in God.

Due to Covid-19, no services will be taking place at this time. Titus Funeral Home of Warsaw is assisting the family.

In lieu of flowers, you may honor Dan with a donation to one of his favorite charities: St. Jude Children’s Research Hospital. Memorial gift call in: (800) 213-6584 or online at
https://www.stjude.org/about-st-jude/faq/how-can-i-donate-to-st-jude.html
To order memorial trees or send flowers to the family in memory of Daniel Caffoe, please visit our flower store.