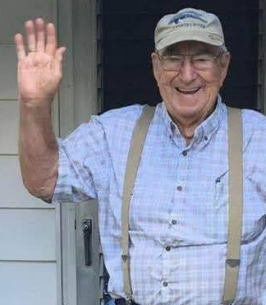 Born in Akron on April 12, 1928 he was the son of Chester and Mary Ellen (Clevenger) Bradway. He was one of eight Bradway children raised in the home and was a 1946 graduate of Akron High School. On March 21, 1948 Dale was united in marriage to Gloria Woods; the pair met while roller-skating in Warsaw when they literally collided on the skating floor. The pair shared nearly seventy years before Gloria passed on January 16, 2017.

Dale and Gloria made their home in the South Bend area in the early years. He worked for Drewey’s as a transport driver and was proud to help start Boy Scout Troop 110 in Mishawaka. Later, they returned to the Warsaw area where they owned and operated Woodies Rental for more than 25 years. More personally, Dale was an avid fisherman who enjoyed time spent on Chapman Lake. He was practically the mayor of Osborn Landing and is remembered for his daily golf cart ride, picking up rubbish around the neighborhood with his dog, George in their red cart.

Dale and Gloria began wintering in Florida in 1975. There, Dale was active in the Masonic lodge, he was also a member of the Warsaw Lodge and a longtime member of the Leesburg Lions Club. He had served for many years on the Cardinal Center board and was board chairman for several terms.

Those who survive with memories to cherish include three children: Jim Bradway of Greenfield, Charles “Chuck” (Janice) Bradway of Homosassa Springs, FL and Ruth (Ken) Bond of Silver Lake; eight grandchildren; 26 great-grandchildren and three great-great-grandchildren. In addition to his wife, he was preceded in passing by his son, Larry Bradway; daughter-in-law, Janet Bradway; five brothers, two sisters and their parents.

A Life Celebration® is planned with Titus Funeral Home, 2000 East Sheridan Street, Warsaw where friends may gather for visitation on Tuesday, February 23, 2021 from 4 to 7 p.m. A private funeral and graveside will be held on Wednesday in the funeral home with Bob Jarboe(ret.), Chaplain of Kosciusko Home Care and Hospice officiating. A live stream of the service may be viewed at www.TitusFuneralHome.com by clicking “Live Stream” The Live Stream will begin at 10 a.m. while the funeral service begins at 11 a.m.

In Lieu of Flowers, memorial gifts may be directed to Animal Welfare League of Kosciusko County (where Dale adopted his canine pal, George) or to Kosciusko Home Care and Hospice (who tenderly cared for Gloria in her final days).

To order memorial trees or send flowers to the family in memory of Dale Bradway, please visit our flower store.