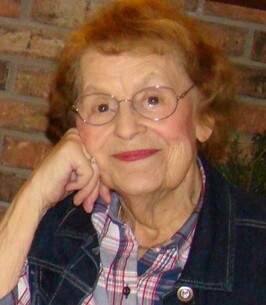 The daughter of John Slazas and Iva (Hickman) Slazas, Charlotte was born on February 14, 1934. She grew up in Fountain County, Indiana and was especially close to her grandmother as her mother, Iva died when Charlotte was only eight years old.

Professionally and naturally, Charlotte was a teacher. She genuinely loved teaching and dedicated nearly 30 years to the Kindergarten classes of Washington and Madison Elementary. Though she valued education and earned a master’s degree from University of Saint Francis, Charlotte is best remembered for teaching her family about life, love and faith. She especially is remembered for the way she showed her love in personal thank you notes and gifts, in her presence at nearly every athletic or milestone event and in her organization of family holidays, especially Christmas.

A generous and giving person, Charlotte was a longtime member of First United Methodist Church where she had been active in Sunday School and small groups. She was also active in Tri Kappa, Gourmet Club and was a regular at Warsaw Tiger Basketball Games even when her children were no longer in school. She enjoyed travel and family vacations and was enormously proud of her children, grandchildren and great-grandchildren.

Friends may gather with the family at First United Methodist Church, 179 South Indiana Street, Warsaw on Saturday, May 15, 2021 beginning at 10 a.m. At Noon, Pastor Brian Smith will officiate Charlotte’s funeral service with burial following in Oakwood Cemetery, Warsaw. Titus Funeral Home is assisting the family.
To order memorial trees or send flowers to the family in memory of Charlotte Zachary, please visit our flower store.