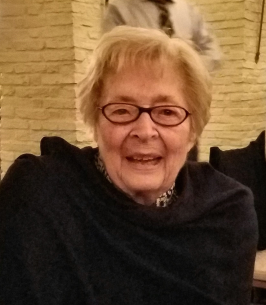 Charlene Mae Vaughn, age 96 and a longtime resident of Fort Wayne passed away quietly in the loving care of her family at home on Sunday, February 6, 2022.

Known to most as "Char," she was the daughter of the late Fred and Louise (Mueller) Enichen. Char was born in Dixon, IL on May 11, 1925 and was a graduate of Dixon High School where she was a cheerleader and in the cymbal line of the marching band. Also in Dixon, Char met the love of her life John Thomas Vaughn, who most knew as "Jack." The pair were married on September 22, 1943 in Dixon. They shared more than fifty-one years together before his passing in March of 1995.

A beautiful and caring person, Char is remembered for her fun-loving personality and her sense of humor. She loved to laugh especially while spending time with her large family - of whom she was extremely proud. In addition to raising her children, she worked at Sears, Roebuck and Company in the Credit Department for 15 years, retiring in 1983. She and Jack enjoyed bowling, playing cards, traveling and spending time with their friends. She loved to knit, sew, crochet and needlepoint. She lived a full, rich life.

Friends may join the family for a time of visitation on Friday, February 11, 2022 from 10 am to Noon at D. O. McComb and Sons Foster Park Funeral Home, 6301 Fairfield Avenue, Fort Wayne. A Mass of Christian Burial will be held at 12:30pm at St. Therese Catholic Church, Waynedale. Burial will take place at Greenlawn Memorial Park Cemetery, Fort Wayne. Warsaw's Titus Funeral Home and Cremation Services is entrusted with Char's Life Celebration®

In lieu of flowers, the family would prefer memorial gifts to either the Alzheimer's Association or to Indiana Women In Need, a charity which helps breast cancer patients to obtain otherwise unaffordable treatments. Written condolences may be left at www.TitusFuneralHome.com

To order memorial trees or send flowers to the family in memory of Charlene Vaughn (Enichen), please visit our flower store.