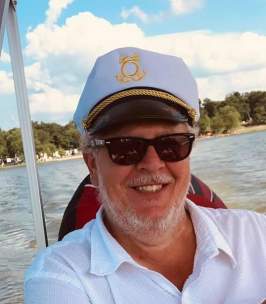 Casey Lee Crise, age 62 of Warsaw and previously a longtime resident of South Bend, passed away at Kosciusko Community Hospital in Warsaw on Tuesday, March 30, 2021. His passing was unexpected.

Born on February 26, 1959 in Yuma, AZ, he was the son of the late Wayne Crise and Carole A. (Brown) Crise. He spent his formative years in the Garrett area and was a graduate of Garrett High School. Professionally, Casey was an engineer, working as a circuit board designer for Environmental Technologies Inc (ETI) in South Bend. He spent more than 32 years there before he recently retired to Pike Lake where he loved to fish.

He also enjoyed traveling and especially liked cruises. He was funny, fun-loving and rarely knew a stranger. Casey loved people and loved time spent with his family who meant the world to him. He enjoyed time on the boat, fine cigars and laughing with those he cared about most.

On July 25, 2020, Casey was united in marriage to Sandy Crise though the pair spent more than ten years together before they were married; she survives in Warsaw. Also surviving are two children: daughter, Jessica (Juan) Almonte of South Bend and son, Alex (Kalen) Crise of Indianapolis; five grandchildren: Myah, Leylah and Elyzah Almonte and Zander and Connor Crise; brother, Kelly Crise; sister, Peggy Anderson; mother, Carole Crise; two stepchildren and eight step-grandchildren. He was preceded in passing by his father, Wayne.

Titus Funeral Home of Warsaw is assisting the family. A celebration of life is in the planning stages for a later date. Those wishing to express their sympathy are encouraged to do so with memorial gifts to Casey’s treasured Pike Lake. Send gifts to Pike Lake Association, PO Box 133, Warsaw, IN 46581.
To order memorial trees or send flowers to the family in memory of Casey Crise, please visit our flower store.