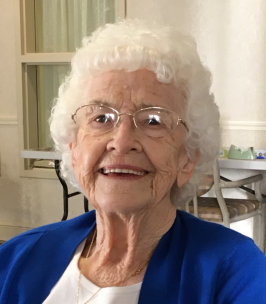 Brookie Williamson, a longtime resident of Warsaw and recently of Grace Village Assisted Living, passed away quietly on Wednesday, September 8, 2021. She was 88 years old.

Born in Kirk, West Virginia on October 28, 1932, Brookie was born to Robert Hager and Myrtle (Maynard) Meade; her step-father, Carlos Meade was a huge influence in her life. She spent her formative years with her grandparents, Owen and Nancy Jane Maynard with whom she became very close. Her parents and grandparents preceded her in passing.

Brookie was united in marriage to Glen J. Williamson in 1953. The pair shared more than 63 years together before Glen passed in 2016. Together they were very active in their church, Pleasant Valley United Baptist Church at Rose Hill. They began their church membership in the United Baptist Church in 1959 and enjoyed the fellowship and friendship the church family provided. Brookie especially enjoyed cooking for and hosting their church family in addition to her own family.

Brookie was a skilled cook, remembered for many talents but especially for her peanut butter fudge and fried chicken. She enjoyed canning and preserving from the family garden and enjoyed traveling to different churches. Later in life, while living at Grace Village, she enjoyed various activities, especially the art classes, group exercise and the close relationships she formed with staff.

Those who survive include son, Glen R. Williamson (wife, Laurie) of Warsaw; two grandchildren: Eric Williamson of West Lafayette and Emily Williamson of Boulder, CO and sister, Edna Crist of Mentone. In addition to her husband and parents, she was preceded in passing by four brothers: Curtis Meade, Don Meade, Fred Meade and Albert Parsley and three sisters, Joan Grodhaus, Mary Shepherd and Bernice Owens.

Friends may join the family for visitation at Titus Funeral Home and Cremation Services, 2000 East Sheridan Street, Warsaw, on Sunday, September 12, 2021 from 2 to 4 p.m. On Monday, September 13, Brookie’s friends, elders of her church, will officiate her funeral beginning at 10:30 a.m. Burial will follow the funeral at Oakwood Cemetery, Warsaw.

Memorial gifts may be directed to Kosciusko Home Care and Hospice, P.O. Box 1196 Warsaw, IN 46581. Written condolences may be left at www.TitusFuneralHome.com

To order memorial trees or send flowers to the family in memory of Brookie Williamson (Hager), please visit our flower store.