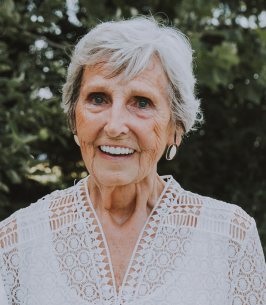 Betty R. LeCount, a resident of Warsaw, passed away quietly just after 10 p.m. on Tuesday, December 14, 2021 in Warsaw’s Kosciusko Community Hospital. Born in Berea, Kentucky on December 16, 1937, Betty was the daughter of Gilmer Wilson and Dixie (Lewis) Wilson. She spent her formative years there and later attended the University of Kentucky with a focus on accounting.

Professionally, Betty worked as a bookkeeper and accountant for her parents’ businesses while attending school. After marrying Oren L. Collins, Jr., and starting a family, she moved to Fort Wayne to assist her husband at his family’s dry-cleaning business. She also assisted various businesses in Northeast Indiana and Kentucky with tax preparation and bookkeeping.

Betty was very active in the Allen County Democratic Party, assisting campaigns, identifying, and training volunteers. She served several terms as the Party’s Vice Chairperson. Betty also served the City of Fort Wayne as a member of the Board of Public Works and several years as the Director of the City Personnel Department.

Betty married Charles Stephen LeCount on October 24, 1992. Eventually they both retired and spent many happy weekends on their boat at Lake Wawasee. They also traveled extensively in the United States and Canada in their motorhome and spent many winters in Florida. Betty had a strong work ethic even during retirement. She enjoyed her garden, flowers, and dogs, but most of all she loved her family dearly.

A Life Celebration® is planned with Titus Funeral Home, 2000 East Sheridan Street, Warsaw where friends may gather on Thursday, December 23, 2021 beginning at 11 a.m. At 1 o’clock, those in attendance will celebrate Betty’s funeral service.

Memorial gifts may be directed to the Kosciusko County Community Foundation. Written condolences may be left for the family at www.TitusFuneralHome.com


To order memorial trees or send flowers to the family in memory of Betty LeCount (Wilson), please visit our flower store.