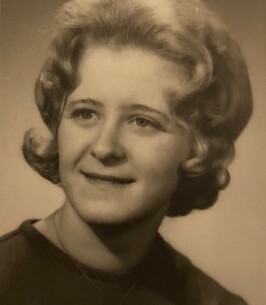 Annette Evon Wappes, age 73 and known to some as “Netty,” passed away peacefully on Saturday, August 7, 2021 at 6:05 a.m. in Warsaw at Kosciusko Community Hospital with her daughters at her side. She called Warsaw home for nearly 40 years. She was born in Churubusco on April 28, 1948 and was the daughter of Clifford and Helen (LaRue) Wappes.

Annette attended high school in Kendallville and graduated there with the class of 1966. Professionally, she worked for Zimmer for many years. She spent most of her career in the polishing department but retired as an inspector in 1996.

She was a longtime member of St. Anne’s Episcopal Church and sang in the church choir for some time. She enjoyed crochet and sewing, even making her daughter’s clothes when they were younger. She loved music of all kinds, especially blues and classical, though nothing meant more to her than time spent her children and grandchildren.

Those who will miss her generous, kind, and caring spirit most include two daughters: Elizabeth “Lisa” (Lawney I) Francis and Paula (Cecil Fowler) Shearer – both of Warsaw; son, Edward Rose of Ligonier; grandchildren: Trista Bartman of Pierceton, Michael Sutherlin of Warsaw, Lawney (Precious) Francis II of Etna Green and Jacob Francis of Warsaw; three great-grandchildren: Delila, Emrys and Azazel; sister, Linda (Ray) Smith-Jones of Albion and brother, Barton Wappes of Pittsford, Mass. She was preceded in passing by a son, Burdett Wappes; sister, Sandy Hile and her parents.

A Life Celebration® is planned with the assistance of Titus Funeral Home and Cremation Services. Friends may gather at St. Anne’s Episcopal Church, 424 West Market Street, on Tuesday, August 10, 2021 from 5 to 7 p.m. On Wednesday, Annette’s funeral will take place in the Church beginning at 11 a.m.

Those wishing to express their sympathy should consider a memorial gift to St. Anne’s Episcopal Church, 424 West Market Street, Warsaw, IN 46580. Written condolences may be left for the family at www.TitusFuneralHome.com

To order memorial trees or send flowers to the family in memory of Annette Wappes, please visit our flower store.